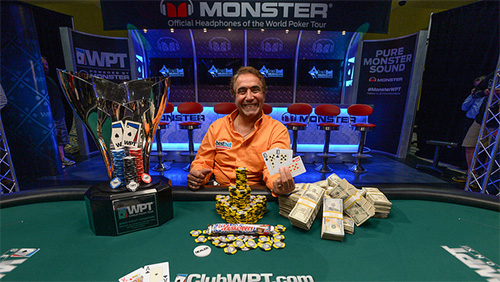 Nabil Hirezi has pulled off a ‘Rocky’ like performance to become the latest member of the WPT Champions Club after securing victory at the WPT Jacksonville Bestbet Open.

The 59-year old Dentist may have started the day with the chip lead, but he still had to defeat former champions James Calderaro and Jordan Cristos, as well as the former WPT Player of the Year (POY) Faraz Jaka.

Hirezi is used to pulling out teeth, but this was anything but, as he used every bit of his know how to take $206,0431 from a card room he can deservedly call his home.

It was the former POY who was first to bite the proverbial dust, and what a cooler it was. Peter Le and Faraz Jaka getting it in pre flop with aces versus kings and a third ace on the flop ensured that Jaka was going to have to be content with yet another near miss at a WPT final table.

Then we lost the former champion Jordan Cristos.

It was a three bet pot with Cristos calling a Hirezi river shove on a board of [Qh] [5d] [2s] [Js] [4c], after Cristos had bet the flop and then both players had checked the turn. It was a wheel straight for Hirezi and Cristos mucked his hand before exiting in fifth.

Jaka’s vanquisher was next to be ousted after finding himself short, and all-in, holding [Qd] [6d]. Brian Green and Hirezi were both still in the hand until some Green betting on a flop of [8h] [6h] [4s] took the hand to showdown and he had a set of fours to send Le crashing into the rail.

The pattern reinstated itself in the next knockout when Green and Calderaro got it in on a board of [Jd] [Ts] [5s], with the former champion holding top two pair, and Green holding queens. The champ’s hand held and suddenly we was heads up.

JC Tran made it title number two at Rolling Thunder this week, and Calderaro was after much of the same, as he entered the heads-up phase with a 4,090,000 v 3,600,000 chip lead and all of the experience.

But what does that matter when you are flipping for a title – and what a flip it was!

Hirezi getting it in with pocket tens against the ace-king of Calderaro. A King on the flop giving Calderaro the advantage, before a ten on the river sent Hirezi’s rail into raptures.