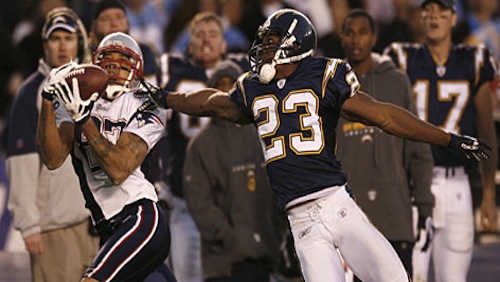 Former NFL player Reche Caldwell probably wishes he’s still playing in the NFL these days. If he was, he likely wouldn’t be in trouble with the law for operating an illegal gambling house. But the truth is, Caldwell, at 34 years old, is no longer a good player by any standards and that likely played a role in him getting caught and charged for running an illegal gambling operation in Tampa.

The brother of current Denver Broncos receiver Andre Caldwell, Reche was pointed to as one of three leaders of the operation, a role he shared with Bobby Eugene Richardson and Kenlun Dawson.

The three were taken into custody after Tampa police executed a search warrant on a house in Tampa, which local law enforcement authorities soon discovered was being used as a headquarters by Caldwell and his group to run the illegal betting shop. Sketchy, sketchy indeed.

In addition to the former NFL receiver, a handful of other individuals were charged with a variety of crimes ranging from probation violations, possession of a controlled substance and illegal gambling. Among the names that have been already identified include Rico Deangelo Longstreet, Bernard Rogers, Troyanoski Jones, Allen Jones, and Dennis Robinson.

As for Caldwell, he was freed hours after his arrest when he posted a $4,000 bail. Rest assured, the former NFL receiver who once caught balls for Tom Brady will still have the courts to answer to as to why he and his friends were caught running an illegal gambling operation.

If he’s proven guilty, then there’s a good chance that he’s going to see a jail cell in the future, in which case would prove to be a dramatic turn of events for somebody who was considered a standout receiver at the University of Florida before embarking on a career  in the NFL before it ended in 2007.