The Red Wire: Lessons From The Church Committee 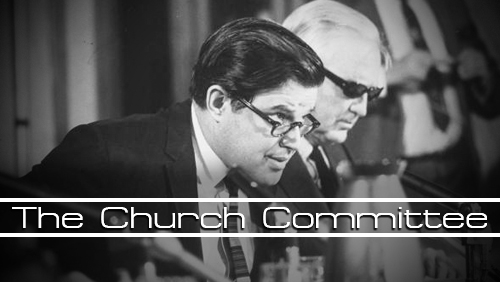 The Edward Snowden leaks have revealed a wide range of activity by the NSA and the rest of America’s intelligence apparatus. All of it is done in the name of protecting the United States. Some is coming to light for the first time and provoking surprised reactions even from members of Congress who voted for legislation that the agencies use as justification for their surveillance programs. The rest has been known to those legislators entrusted with direct oversight of the agencies for varying amounts of time.

In a frightening example of regulatory capture, the overseers in Congress have become the biggest cheerleaders for the agencies they are trusted to monitor. This is mostly the way things have been for decades now (though Mike Rogers and Dianne Feinstein are particularly fervent supporters). But it wasn’t always so. The first attempts to oversee the activities of the CIA, FBI, and NSA were the direct result of an impulse to restrain government abuses.

The bipartisan United States Senate Select Committee to Study Governmental Operations with Respect to Intelligence Activities convened in 1975 with the express purpose of investigating illegalities by the FBI and intelligence agencies. The Church Committee, as it is remembered, became the first major inquiry into how these agencies operated within the United States. It served as a forerunner to the later Senate Select Intelligence Committee, but unlike today’s captured overseers it sought to correct unconstitutional abuses carried out in the name of patriotic duty.

Tales of assassination campaigns against foreign leaders and domestic spying by various branches of the government, as reported by Seymour Hersh in the New York Times, prompted the Senate to establish the committee in January 1975. Sen. Frank Church of Idaho chaired 21 public hearings (some televised) and another 250 executive hearings, interviewing some 800 people over the course of nine months. What the committee uncovered filled 14 separate reports on a wide array of topics.

The parade of glaring abuses of power in the reports was impressive in a dark way. The use of the Internal Revenue Service against political opponents as far back as FDR and the FBI’s infiltration of domestic political groups under COINTELPRO came out because of the Church Committee’s investigations. Abuse of the U.S. mail was so widespread and varied that it was covered in its own book. So was the Huston Plan, President Nixon’s abortive decision to unleash the CIA, FBI, and NSA on American dissidents. There were also glimpses into the dark heart of the intelligence agencies, from the MKULTRA mind control program to the hiring of the Mafia to kill Fidel Castro. Those sorts of egregious abuses overshadowed the mundane data collection practices of the pre-Information Age NSA, which cooperated with a number of corporations to monitor Americans’ international communications and merited its own book with a specific focus on Fourth Amendment Rights.

There were plenty of charges that the committee’s work was harming the country, just as there are about Snowden and the journalists he has worked with in our time, especially after the murder of a CIA station chief in Greece. But where both today’s executive branch and its legislative overseers have gone on the defensive and completely sided with the NSA in the wake of the Snowden leaks, the Church Committee had the explicit and overwhelming bipartisan backing of the Senate toconduct a thorough review of the agencies’ conduct.

The establishment of a modern equivalent of the Church Committee isn’t an impossibility, but it is unlikely for a number of reasons. For starters, the track of the American intelligence services’ history since the Church Committee has been defined by pushing back against its recommendations. This began during the Reagan administration, when former CIA director George H.W. Bush was the vice-president and committee recommendations were rolled back in support of clandestine wars in Central America. By the time Bush’s son became president in 2001 the former restraints were completely buried by the PATRIOT Act and other post-9/11 legislation and executive orders, not to mention the two decades of judicial decisions underpinning the drug war.

In essence, the intelligence agencies won the fight to do as they please a long time ago. However, the Snowden leaks and the journalism they have produced have created a groundswell in citizen concern about the parade of abuses they revealed. That has led to the formation of an ad hoc, bipartisan coalition in Congress that’s looking for ways to tame what it sees as an out-of-control intelligence community that has internalized unconstitutional abuses. There’s been a lot more resistance this time around than there was in the 1970s, but the Church Committee does provide a precedent for reporting based on leaks leading to eventual government reform of the intelligence agencies.

Book II of the committee’s report, which detailed the growth of domestic surveillance, began with a heading called “The Lesson: History Repeats Itself.” The cessation of official government surveillance to determine “political or other opinions” at the direction of Attorney General Harlan Fiske Stone was never written into law, and it makes clear that this is the reason “the abuses returned in new form.” This included the application of techniques once used against foreign agents and suspected Communists to peaceful American citizens who disagreed with their government’s policies, regardless of whether they were likely to take any action based on those opinions. The sole reason these abuses were able to take place, the committee determined, was because there was no legislation to prevent it.

That lesson is just as true today as it was in 1976. If we’re lucky enough to get a modern version of the Church Committee, its number one mission should be to use the information it gathers to craft new legislation, with the express purpose of reining in unconstitutional abuses while strengthening national security. That would fire up the pro-government forces for sure, but it’s worth remembering that even the CIA’s own history admits the committee “took a judicious approach that tempered criticisms.” It suggested that America maintain the ability to strike at forces that actually wanted to harm it, for instance, rather than outlawing covert activity altogether. Any similar committee today would likely make the same kind of recommendations, focusing on improving the protection of Americans’ civil rights rather than degrading the agencies’ ability to do their jobs lawfully.

The lawyer F.A.O. Schwarz, who served as counsel to the Church Committee, in 1987 described all the actions uncovered by the investigations as being directed by “highly placed officials, confident their behavior would remain forever secret, violat(ing) American ideals to accomplish what they saw as worthy ends.” The only real difference today is that modern technology makes those violations more efficient – and the need to rein it in more important – than ever before.