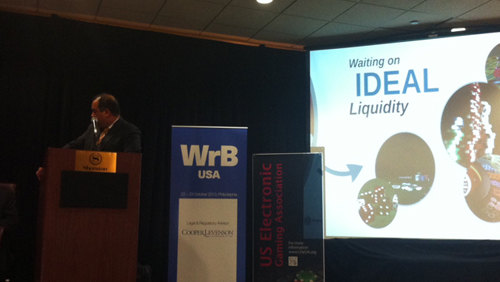 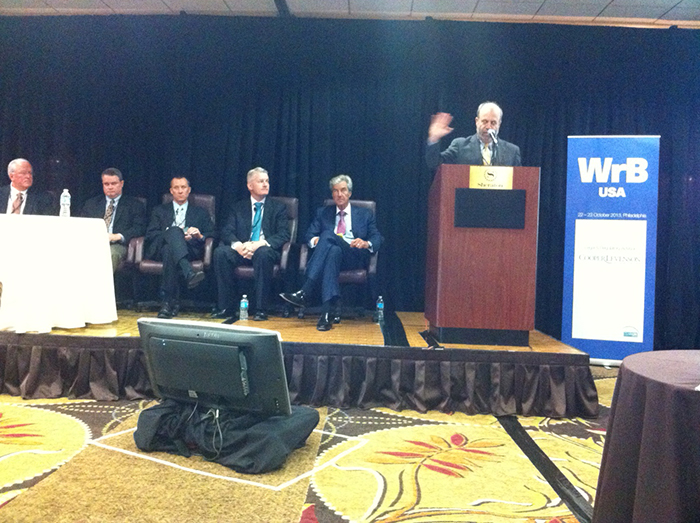 “I wouldn’t be building my business based on a compact”. – Jon Porter, US Electronic Gaming Association (Update – WrB Philadelphia Day 2 Recap here.)

“There’s all this talk about being the center of the universe- in the US there won’t be 48 centers of the universe, it just isn’t going to happen”. –Mark Lipparelli, Gioco Ventures

“Once you’ve asked the Federal Government to get engaged, you really have to watch what you’ve wished for”. – Jon Porter, US Electronic Gaming Association

“Because we are operating on a state by state level doesn’t mean the Federal Government has left the scene”. -Mark Hichar, Hinckley Allen

“People keep talking about Bad Actors and I’m from California- our last Governor was Arnold Schwarzenegger, so we get confused”. –Richard Schuetz, California Gambling Commission

Clarion organized the first US based World Regulatory Briefing (WrB) in Philadelphia Pennsylvania, as the tipping point has finally been reached- the regulated online gambling market is kicking off in the United States.  This two-day discussion has attracted regulators, politicians, associations, land based companies, tribal casinos, online companies and more from Philadelphia, Massachusetts, Nevada, Delaware, New Jersey, California, London and beyond.

Over the course of Day One there were a number of sessions and presentations organized, yet there were only a handful of topics that kept creeping up over and over, clearly issues that are top of mind at present.  These issues consisted of: Nevada, New Jersey and Delaware updates with respect to their iGaming regulation, cannibalization of current gambling economies in US states such as land based and lotteries, Federal Government involvement, compacting and liquidity.

AG Burnett, Chairman of the Nevada Gaming Control Board said he believes the online poker legislation in his state has been a success so far, with the measure of success mostly being the minor regulatory hitches and the lack of scandals.

An issue Nevada has had to deal with includes problems getting online for those located in the “buffer zone” at the borders of Nevada.  Only a handful of people have complained of this issue, but Burnett pointed out that he’s actually happy for the problem as it proves that the geo-location services are working.

Over in New Jersey, the November 26th deadline is looming and according to attorney Lloyd D. Levenson, Division Gaming Enforcement (DGE) employees are working severe overtime to hit this deadline and they still planning to launch on time.

Ed Sutor, President and CEO of Dover Downs confirmed that in nine days (October 31) Delaware will become the first state in the country to go live with full gaming- not just poker, but slots and table games as well.

Everyone in the audience and far, far beyond awaits with baited breath to see how these regulatory regimes work out for each state, but it will take time to collect the data and review the results.  In the meantime, other states that are looking to regulate still have some concerns about cannibalization of the gambling businesses that have been running in their states and generating revenue for years. 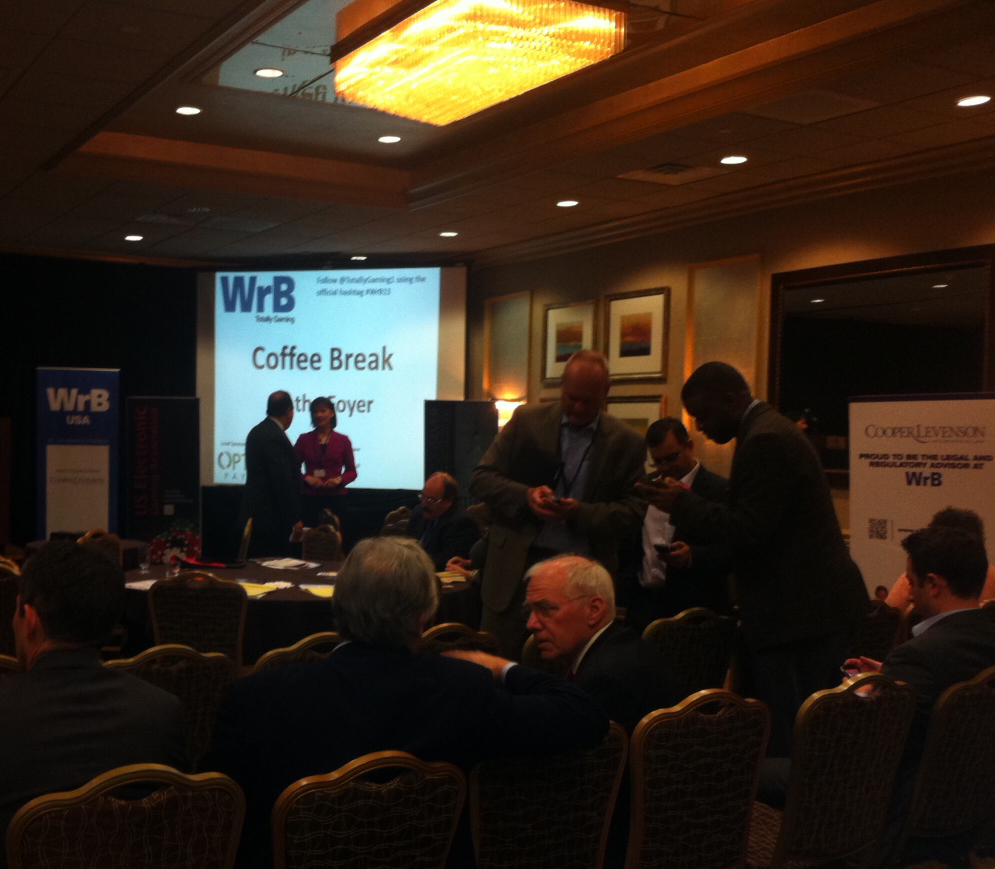 Commissioner of the Massachusetts gaming Commission James McHugh confirmed that the Massachusetts state lottery is the most penetrated lottery in the USA.  Therefore, it’s a challenge for MA to figure out how to bring online gambling into the state while preserving the benefits that the lottery, the lottery vendors and the racetracks are now reaping.

To ease the minds of those who feel the online industry will cannibalize the land based, Sutor pointed out that 85% of Delaware’s land based revenue comes from slots and the average age of the consumer is 58.  Experts in Europe and Canada have said that the younger generation wants online- they are on their mobile devices, their tablets- and they want everything mobile and online.  Sutor says he’s happy to tap into this new market and is not concerned about cannibalizing his land-based business.

Jon Porter’s solution has been to spearhead the US Electronic Gaming Association, a grass roots organization that brings together all the stakeholders in the US online gambling industry and crafts clear and concise messages to bring to Capital Hill.   Porter’s claim is that we need one, unified voice to stand up for the industry when it comes under attack by congress- the AGA can’t do it, the tribes can’t do it, so he’s decided to it – “we should be driving the message, not congress”, he said.

While we all agree Federal Regulation is unlikely, we also agree that the Federal Government will get involved in some way.  Liquidity is a big issue for state-by-state regulation and Rep. Jim Waldman of Florida made the point that compacts will be made with neighboring states, other states across the USA or even with different countries and therefore the Federal Government must be involved on some level.

Liquidity and compacting was the most discussed topic throughout the day and also the one that is most unresolved.  So much time and attention was spent on the idea of compacting with Nevada and New Jersey but Schuetz was quick to point out that there are 38 million people in California, so why would compacting with smaller states such as NV and NJ even be on the agenda? If and when California regulates, “everyone would want to play with the big dog which would be us”, he said.

Regardless of which state(s) are the most desirable to compact with, the even bigger issue is HOW to compact or come up with any sort of agreement at all.  Lipparelli advises that the private industry, the regulators and the policy makers must work together to determine compacting and agreements- “there needs to be a balance”, he said.

We’d be dreaming if we think the standards between any of the states will be matching up perfectly.  Jurisdictions have to realize this fact “or else we will just be sitting here in five years with the same three states with regulation but with limited access”, Lipparelli said.

When it comes to online poker, liquidity and therefore compacting is absolutely essential for success over time.  According to John Pappas of the Poker Players Alliance, not even California can sustain a healthy poker ecosystem due to a lack of time zone variance to satisfy players who want to play at unconventional hours.

On the other hand, attorney and former poker network owner David Gzech believes the “magic number” for sustaining an online poker ecosystem includes a population of 9 million, with 2000 players online at a time.  California alone can easily hit this number and if Nevada compacts with a few other states they can too, however Pappas still stands firm on his belief that a poker network will need multiple time zones in order to survive long term.

After much debate on the liquidity and compacting issue, one thing that everyone agreed on is that a poker network formed between US states would be the ideal solution.  Itsik Akiva, formerly with Everest Poker, added that in this scenario each state could keep their brands, yet pool their liquidity at the same time. “It’s the way to go”, he said.

Exclusive interview with A.G. Burnett: The state of Online Gambling in Nevada
Becky Liggero Fontana
9 May 2013
.