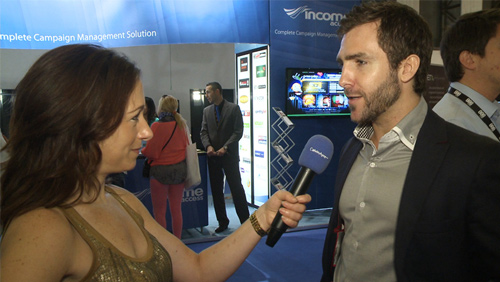 The second day of the Barcelona Affiliate Conference (BAC) was busy, but less busy than day one – we’re guessing a combo of sleeping in, gorgeous weather and the tattoo conference next door could have distracted the crowd a bit.

Nevertheless, the affiliate foot traffic was there, the models, models and more models were there and the open bar kicked off again at 3pm with even more delegates taking advantage of the drinks than yesterday.

Without a doubt, the mood of day two was very casual and networking focused, although Louis Deering of Income Access led a popular session this morning on the importance of social engagement.

Deering’s advice to the audience was to tie everything in your marketing channel to social media- add the “share” button to every page and get those widgets- don’t focus on the ultimate conversion, rather focus on getting people to engage.

Some other tips revealed by Deering in the session included posting content with questions and posting content that is controversial- you want a reaction from your audience and someone on your team must respond to that reaction- even if a comment is negative, it’s a perfect opportunity to engage that customer with a thoughtful response.

For the few of us “old timers” in the audience, the familiar and heart warming example of Golden Palace’s (RIP) incredibly successful publicity stunts were brought up, everything from tattoos, to streakers at the Super Bowl, to Virgin Mary cheese sandwiches, to purchasing kidney stones off of eBay…Golden Palace got attention from mainstream media on these stunts and guess what? We’re still talking about it today, almost a decade later.

After observing the booths on display at the BAC, there were two interesting points that deserve some attention- first, the unusual presence of a few affiliate programs targeting Asian traffic and Latin American traffic despite the fact that BAC has traditionally been a Euro focused event.  One could assume that this shift has begun because the Euro market is saturated and segmented, plus the once very lucrative American market is now moving towards tax and regulation, so affiliates are looking for new markets to dominate.

The Latin American market has been identified as an area of interest for iGaming professionals for a while now, but the region has not been ripe for affiliate penetration until more recently.  At the BAC, Victor Arias spoke to affiliates with Latin American traffic and educated them on the soon-to-be-launched LatAm facing casino www.CasinoFantasia.com that he will be managing.

Arias advised affiliates to focus on creating sites in Spanish and Brazilian Portuguese, with Brazil as a very important region to focus on, certainly because the World Cup will be taking place in the country next year. He also advised affiliates that its overkill to create separate sites for each country in Latin America, something that sounds like good news for everyone.

The second point of interest was the large presence of Binary Options companies who booked out booth space, all offering CPAs like we used to see in “the good old days”.  Banc de Binary actually gave away the biggest prize in BAC history today, a branded Smart Car that was won by the very lucky Roberto Primi of Brightshare who will drive it home to Italy.

All in all its been a great few days in Barcelona at the BAC, especially for Roberto, and just about all delegates are finishing off their day in the sun, at the pub, on the beach or hopefully doing all three.  The fun continues tomorrow at the Intertops Sunday Session and for some of us, next week in Barcelona at the EiG.