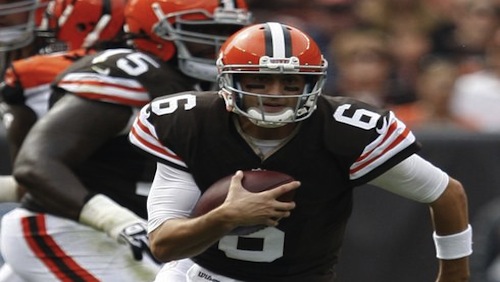 Peyton Manning may be running away with the MVP award this early in the season, but Vegas sportsbooks have a different MVP in mind these days.

Give it up for Brian Hoyer, everybody!

For the second week in a row, sportsbooks are all aboard the Hoyer Express after the Browns quarterback led Cleveland to another win, this time against division rival Cincinnati. Not only did the Browns outplay the Bengals from kickoff to finish, but in doing so, shut down the heavily bet on road team on the way to covering the spread and winning the money line outright.

It was a crucial win for the sportsbooks considering how the other games played out. But the Browns win effectively extinguished a ton of parlays that included Cincinnati, giving them a chance to let out a sigh of relief even before the afternoon games began play. A lot of the early games also turned up being parlay busters with Buffalo (+3.5) beating Baltimore, Minnesota (+3) winning against Pittsburgh, Arizona (+2.5) coming back from almost getting shut out by Tampa Bay, and San Diego (+1) convincingly taking down one of the most heavily bet on sides in this early season, the Dallas Cowboys.

But like most weeks, the wins also came the losses.

Sportsbooks took a heavy pummeling when the three worst possible decisions all went the public’s way. Indianapolis’ 8-point line as road favorites still wasn’t enough to dissuade the public from pouncing on the hapless Jacksonville Jaguars. On the other end of the spectrum, the Broncos’ bandwagon was filled to the brim and even with an 11-point line as home favorites against the Philadelphia Eagles, the public all took Denver going away, which it did, destroying the Eagles, 52-20.

And then there was the most gut-wrenching loss: Seattle at Houston. The game was essentially over with the Texans only needing to control the clock but a late Matt Schaub pick six tied the game only for Seattle to win it in overtime, covering the -1.5 spread, much to the delight of the public.

The late night game between the New England Patriots and the Atlanta Falcons also had a unique twist with sportsbooks rooting for the Patriots, normally one of the most popular public plays in the NFL, to cover the 3-point spread it had against the home team Falcons. It was an odd turn of events that resulted in the public’s seeming lack of confidence in Tom Brady’s receiving corp. and compounded by the desperation in the Falcons to get back into the thick of things in the NFC South.

But Brady and company pulled it off, giving sportsbooks a unique Pats cover that they were all too relieved to get.