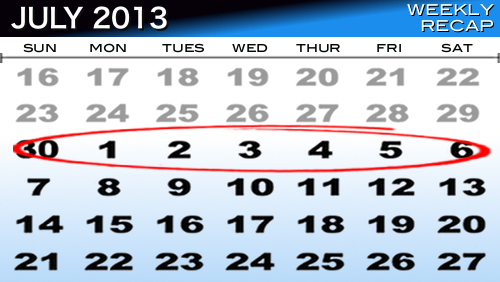 Chico Poker pledged to restart payouts this week; Zynga switched CEOs; Ultimate Gaming signed a deal with Trump Taj Mahal for Internet gambling in New Jersey; like the Taj Mahal, all casinos in NJ applied for an internet gambling license; Vince Martin looks back at a blah second quarter for gambling stocks; I Nelson Rose sat with our own Becky Liggero for a 3 part interview discussing Nevada gambling regulation (part 1, part 2, part 3); PokerStars unable to purchase the Atlantic Club signed a deal with Resorts in NJ; Delaware released their proposed online gambling regulations.

The WSOP continues its six-week poker marathon and our team is there providing tons of coverage and interviews with the pros.  Lee Davy was able to catch up with Phil Galford, Barny Boatman, Matt Waxman and Chris Moorman to name a few. Tatjana Pasalic was in front of the camera providing video coverage of the Little One for Drop (Day 1a, Day 2b, Day 2) and of course the team will be in Vegas through the main event until the November Nine is set.

OPAP sale stalls while Betfair and William Hill call Greek Bluff; just in time for Wimbledon, a UK Gaming Commission shows a large spike in Tennis bets; GVC Holdings released an H1 trading updating, claiming that newly acquired Sportingbet will be profitable by the end of 2013; William Hill was forced to pay rival 32Red £1.1m as part of their trademark dispute; Bwin and others have inked various shirt sponsorships with European football clubs; Old Man Adelson was at it again this week, this time telling Spanish authorities that online gambling needs to go.

Macau’s June GGR hits MOP28.3 Billion with SJM leading the way; Lawrence Ho becomes the first casino operator to ink a deal inside Russia’s new casino zone;  Crown ltd. has made it through the third stage in it’s bid to open a Sydney Casino; Thai police bust an online gambling ring; Guam passed a bill to outlaw gambling after it’s hospital debts are paid but the citizens are saying not so fast; Tom Waterhouse is in the news again, Hills is looking at purchasing Tom Waterhouse’s operations for US $136m.