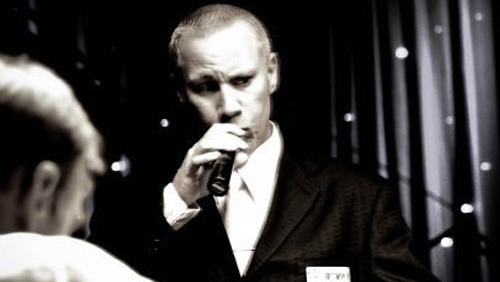 His perfectly laundered, and pressed, orange shirt is exactly the same color of the fonts used on the tournament clock. With some people you would put that down to a coincidence…but not Red Bull Robbie Thompson. This man is so sharp he could cut himself, and I’m a little surprised that he hasn’t dyed his hear orange as well.

His tie is perfectly knotted and stays stuck thanks to a silver tiepin. His suit fits perfectly and he is wearing black shoes that are polished to army standards; the type you want to be wearing when doing the Fandango with Shannon Elizabeth.

He is walking around the last few tables of the 2-7 No-Limit Draw Lowball looking like a lion prowling the savannah. I haven’t got a clue what he is doing, but he looks pretty darn good at doing nothing.

Red Bull Robbie Thompson is the man who gets the lady juice flowing when the final table comes together. For the past five years he has put the mic to his mouth and announced some of the greatest names in the world of poker.

The players love him, the media love him and the fans love him. He doesn’t just call the action; he calls the action with the gusto of Michael Buffer on steroids. He’s the type of guy that attracts all kinds of animals to his bedroom window when he is getting down and dirty. It’s the gravel…it’s the pitch…it’s the POW!

“It can be a boring job for some. How many times can you say fold and make it interesting. But boring jobs will be boring if you make them that way. I try not to make my job boring.” Says Thompson.

Thompson was a dealer when he ‘buffaloed’ his way into the position of Final Table Announcer.

“I knew how to hold a mic because I was pretty good at karaoke.”

But the first year was a nervous one for him as he left behind a job he loved and stepped into the unknown. Over the years Thompson has played with his art. He has fine-tuned it and as his confidence grows so does his show. When the final table action gets mundane and boring, Red Bull Robbie is the entertainment.

During the 48 days that the WSOP fills the halls of the Rio, Thompson will be present for all but seven of them. He will work between 9-12hrs per day and if he could choose any other job in the world he would be standing at the final table doing what he does. He loves it. But he also loved his life as a dealer…everything except the pay that is.

“I miss dealing. It’s what makes the whole poker world go around. They are under appreciated – especially the good ones. I don’t want dealer pay but I miss it and its fun to do.”

When Thompson isn’t helping the WSOP be the greatest poker tournament in the world, he is covering final tables for PokerStars on the European Poker Tour (EPT) circuit, acting as a hunting guide in the fall and very occasionally you will find him standing in front of his mirror, in his stars and stripes boxer shorts, shouting words like ‘Bang!’ and ‘Pow!’ into an air rifle.