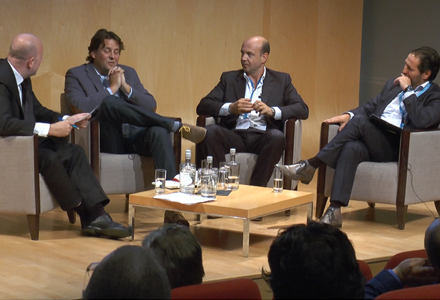 The second Gaming in Holland Conference took place in Amsterdam’s modern World Trade Center, an intimate event targeting those interested in the Dutch gambling market and other hot topics impacting the gambling industry around the globe. Don’t forget all of our daily summaries and checkout iGSS Day 1 and iGSS Day 2.

Organizer and Dutch native Willem van Oort clearly took great care in hand picking the session topics and speakers, something that a clear understanding of the Dutch and global gambling industry certainly requires.  The event itself was not only educational, but also a hotbed for networking and casual exchanges, attracting the Dutch regulators, delegates from gambling companies such as Playtech, Gtech G2, BingoCams and broader organizations such as Google, Bitcoin Foundation and Triple Double.

The Dutch online gambling legislation will likely not go into effect into 2014 or 2015, but a clear message sent to attendees was that land based companies in Holland should start preparing for online, starting now.  Panelist Bart Cordemeijer of BD Sport Europe encouraged companies to “run across the border” and learn from the more mature sports organizations that have been successful in their market for a while and study what they do.

Panelists who participated in the “Online Gaming Made in Holland” session all seem to agree that Holland breeds companies that will be successful in a regulated online gambling market.  Marin Muyser of BingoCams pointed out that there are some very innovative internet companies that come from Holland, a statistic which is promising for the industry.

Eric Olders of JVH Gaming, a company operating in the land based Dutch gambling space, hopes that a new online gambling market will also encourage new products and developments in Holland. He believes that the current overlap between players who enjoy land based and online gambling may be small at the moment but that it will increase over time, especially when it comes to the younger generation.  “Cell phones are glued to their hand”, he said, so one can only assume that mobile gambling offerings will become essential for attracting younger gamblers.

In terms of the actual number of interactive licenses that will be issued within the Dutch market, Moderator van Oort predicted that initially there will be a larger number of entrants than can be sustained, somewhere around 20, but that there will literally be only a “handful” of winners in this market once it matures.

The sessions at Gaming in Holland expanded far beyond the Dutch market and included topics such as payment methods for online gambling in general.  Jon Matonis of the Bitcoin Foundation spoke on the controversial Bitcoin (BTC) currency that is starting to make its way onto the radar screens of online gambling companies.

Matonis claims that BTC operates as the ideal casino chip and enhances the gaming experience by bringing the online experience closer to land based by mimicking three properties- immediacy, irreversibility (no fraud or chargebacks) and complete anonymity if desired.  Matonis also believes that by adopting BTC as a payment method, online gambling casinos will gain a “competitive wedge” against other online gambling sites that do not offer it.