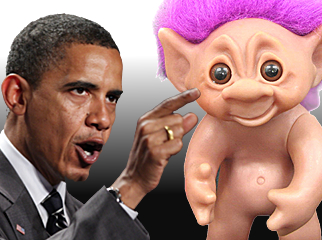 US President Barack Obama has taken a stand against so-called ‘patent trolls’ in a bid to reduce the impediments they put in the paths of genuine technology innovators. On Tuesday, the White House proposed a series of measures, including ordering the US Patent and Trademark Office to require patent holders to update their records by revealing ties to other companies, thereby reducing trolls’ ability to hide behind shell companies in order to disguise the “real party of interest” behind an infringement claim. Such disclosure would also be required in so-called ‘demand letters’ sent to alleged infringers.

Obama also wants an overhaul of the patent examination process to eliminate overly broad aka ‘functional’ patent claims that describe what the invention does rather than what it is. As an example, the White House cites the pharmaceutical industry, in which multiple companies make cholesterol-lowering drugs, but the patents cover different chemical compounds that achieve the same result. Similarly, technology patent applicants would be required to cite a specific way the patent would be applied to a task, rather than its general aims.

Obama stopped short of calling for patent suit losers to pay their opponent’s legal costs, as was proposed under Rep. Jason Chaffertz and Rep. Peter Defazio’s Shield Act, which was introduced in March. But Obama said courts should have more discretion in awarding fees against nuisance suit-filers.

TROLLS LIVING LARGE OFF THE SWEAT OF OTHERS
To underscore the threat posed by trolls, the White House released a paper titled Patent Assertion and US Innovation that claims trolls hit over 100k firms with patent infringement threats in 2012 alone. Troll activity has tripled over the past two years to the point where they now account for 62% of all patent infringement claims. The overwhelming majority (82%) of troll suits involved software patents, making technology companies the trolls’ top targets. Many online gambling firms have been subjected to actions by trolls such as the pond-scummy likes of Lottotron and 1st Technology’s Scott Lewis.

Boston University reported that trolls earned/extorted a reported $29b from tech firms in 2011, a 400% increase over 2005’s tally. The troll’s traditional modus operandi is to seek out-of-court settlements from firms fearing the fate of analytic software outfit SAS, which spent $8m successfully defending itself against just one troll suit, with little recourse to pursue against a non-practicing shell company with no assets. In 2011, both Apple and Google spent more on patent litigation and ‘defensive’ patent purchases than they did on R&D.

PERSONAL AUDIO, PUBLIC ENEMY
The inherently flawed US patent system was recently exemplified in the form of Jim Logan, the self-described inventor of podcasting. Logan has just unleashed a barrage of patent infringement threat letters to a wide swathe of targets, from basement podcasters to major TV networks. The basis for Logan’s claim is that he came up with an idea in the 1990s for a personal audio device that would “interact with the internet and your preferences to pull down, to your personal player, all the personal stuff you wanted to listen to.”

The company Logan created to manifest this ‘invention,’ Personal Audio, never actually built a functional MP3 device, settling instead for a less technologically challenging workaround. Logan offered an online menu of newspaper and magazine articles that he would read aloud onto cassette tapes and mail to customers. Oddly enough, this service failed to catch on with the general public, many of whom surprised Logan with their ability to read for themselves.

Fast forward to the middle of the last decade, when Logan discovers iTunes and iPods and sees his opportunity. Logan’s attorney told NPR that it didn’t matter that Personal Audio had little in common with Apple’s actual technology, because Logan’s patent was “the road map that would tell someone how to do podcasting, how to do MP3 players.” Logan sued Apple over the concept of creating a playlist and a numbskull jury awarded him $8.5m last year. Apple eventually settled out of court for an undisclosed sum. Other Logan suits have led to licensing agreements with other tech giants, including Samsung, Motorola and Sony.

While Logan cops to the fact that his efforts to actually make workable technology “didn’t pan out,” he rejects the depiction of his company as a troll, telling the Australian Broadcasting Corporation that he’s “just trying to basically recoup our investment on the other end by getting some value from patents.” Word to the wise, Bill Beatty, Jim Logan is coming to get you. How about making the next Off The Boards podcast a panel discussion on the merits of Obama extending the scope of Predator drones to include domestic threats?

The Long Con: Nick Garner looks to history for answers
Video
32 mins Ago