It’s all about the Benjamins for Money Mayweather 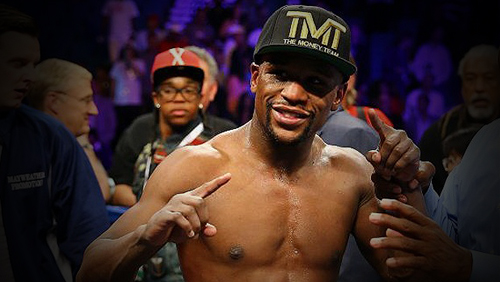 Whether or not it’s true is irrelevant.

Floyd Mayweather Jr. isn’t the type to bashful with his cash. That’s largely why he’s earned the “Money” nickname that has pretty much defined his personality.

It’s always about the Benjamins with the best boxer in the world and his willingness to lay done serious wood on his betting sprees is testament to the kind of free-spending Floyd considers sports betting to be.

Yesterday, though, the Internet was abuzz over Floyd putting down $5.9 million on the Miami Heat to cover the seven-point spread against the Indiana Pacers in Game 7 of the Eastern Conference Finals. A tweet posted by @Pregame_Steam set the off the alarm bells saying that Floyd was putting down that enormous amount on a basketball game.

Celebrity or not, Vegas books, as many of you know, are extremely cautious of accepting single bets of that amount and it wouldn’t be surprising if this story ended up being bogus.

But this no ordinary celebrity. This is Floyd Mayweather Jr., a man whose idea for a dining table centerpiece is a stack of $100 bills that could well have been $1 million. He’s the same guy who considers  a portly white man who lived 300 years ago as his best friend in the world. He’s also the same guy who spent time during a taped interview with Miguel Cotto by giving his opponent a crash course on sports betting.

But most of all, this is a man who routinely – we can’t emphasize that word enough – makes five or six-figure wagers, money that a lot of us can’t even sniff without getting arrested.

Clearly, money isn’t a problem for Money; and if he did decide to plop down $5.9 million on the Heat to cover the 7 points, nobody would be shocked about it.

(For what it’s worth, if Floyd did make that bet, he would’ve pocketed $6.49 million. That’s a lottery ticket for all of us.)

All this is par for the course for Mayweather; he’s built his whole empire on the lifestyle that all of us can only dream of having.

You know how we all love it when we reach into our pockets and discovered a wayward $20 bill that somehow got stuck on the fabric? If that was Floyd, he’d probably wipe his own ass with it before flushing it down the toilet and then washing his hands over having to touch a Jackson.

Multiple media outlets have reached out to Mayweather and his other BFF, Leonard Ellerbe, the CEO of Mayweather Promotions, to verify the report. No word yet on that front.

You can be skeptical about the whole thing, and that’s understandable.

But try doing so while being cognizant of who we’re talking about here.

It’s Floyd “Money” Mayweather. And if there’s one thing we’ve come to know about this man other than his impeccable boxing skills, it’s that he has no problem squaring his shoulders, puffing out his chest, and living up to his self-anointed nickname.