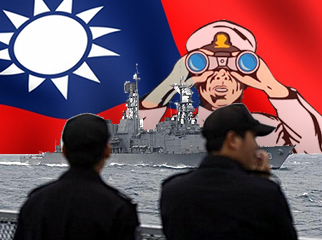 Between February and April, prosecutors allege the “vast” operation handled NT$236m ($8m) of wagers on baseball, basketball and horse racing. (Baseball betting has taken off since Chinese Taipei’s decent showing at the 2013 World Baseball Classic.) Chief prosecutor Wang Chieh-to stated that the crackdown was a joint operation of the Taichung District Prosecutors Office, the Taiwan Bureau of Investigation and the Taichung City Police Department.

‘SCUMBAG’ POKER PLAYERS EMBARRASS TAIWAN NAVY
Taiwan’s bettors don’t have much of a legal option beyond the Taiwan Sports Lottery. If casino gambling is more your thing, the nation’s first casino won’t open until around 2019. Really, the only safe way to gamble in Taiwan is to hop aboard one of the casino cruise boats that dock in local ports. They’re sufficiently popular that the mayor of Keelung wants one of his own. But it helps to remember that if your casino vessel has an impressive array of high-tech weaponry – and your job is to fire that weaponry – this is probably not the time to get your gamble on.

Case in point: The deputy captain of a Taiwanese navy frigate has been slapped with two major demerits and may yet be discharged from the service after being caught gambling following a live-fire military drill off the Penghu islands last month. The China Post reported that the deputy and three other navy personnel were hitching a ride home on a civilian vessel when a bystander snapped a photo of them playing poker on the ship’s deck. The photo made it online, the local media got a hold of it and savvy politicians saw an opportunity to express just how shocked – shocked! – they were.

The sailors were herded a little further down the plank after it turned out that their frigate’s 76mm gun had ceased working during the live-fire drill, possibly because the sailors weren’t paying attention to the gun’s angle of elevation. Navy Chief of Staff Vice Admiral Hsu Pei-shan told members of a Defense and Foreign Affairs committee investigating the gambling incident that the sailors in question were “scumbags.” The Deputy Defense Minister eventually said the Navy was “deeply sorry” over the deputy captain’s “inappropriate behavior.”

The deputy captain has since received the two demerits for neglecting his responsibilities. The three other gamblers each received one demerit while the captain of the frigate – who wasn’t among those caught gambling – was given one demerit and transferred to another position.

LET HE WHO IS WITHOUT SIN CAST THE FIRST DICE
Considering the sailors were aboard a civilian ship when they were observed gambling, the Navy’s reaction appears a tad harsh. There’s been no suggestion that the sailors were playing poker when their weapon malfunctioned, yet the deputy captain may yet see his career come to an end. All because someone photographed him doing something that sailors have been doing since man realized wood floats.

For centuries now, sailors from England to Vietnam have played games like Crown and Anchor and Bau cua ca cop and such. If that’s not far back enough for you, consider that if certain Old Testament-era sailors hadn’t organized an impromptu lottery, Jonah would never have been tossed overboard and swallowed by that great fish. And if God sees fit to utilize gambling to fulfill His commands, than who is the Taiwan navy chief of staff to judge?

The navy brass appears intent on punishing the offenders to the max, but the sailors’ real crime here appears to be getting caught. The navy has been publicly embarrassed and must now be seen to be suitably unforgiving in order to shake off the taint of impropriety. But frankly, ‘scumbags’ seems a little over the top.

There’s no doubt that, until recently, Taiwanese authorities have not traditionally been gambling’s biggest advocates. But plenty of Taiwanese love to gamble, which is why developers like Weidner Resorts are so hot to tap this untapped market. Problem is, the people who don’t like to gamble all have camera-equipped smartphones, so keep the games below decks from now on, guys.