After 26-years in charge of one of the world’s most successful football clubs, 71 year old, Sir Alex Ferguson, has announced that he will finally step down at the end of the season just a fortnight after securing his 13th league title. 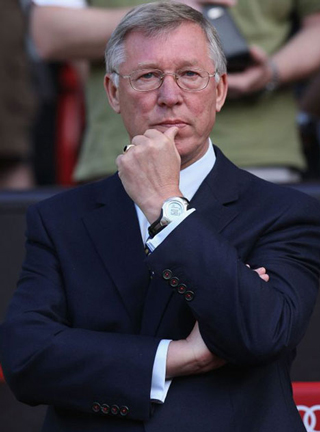 The clouds are grey, the sky has pulled the earth that much closer to its chest and the rain is flowing like the teardrops of thousands of Manchester United fans in the wake of the news that Sir Alex Ferguson is stepping down as the manager of Manchester United at the end of the season.

It’s a little bit like death. You know that it’s on the cards, but you just conveniently ignore it and get on with life. But during those quiet contemplative moments you dread it nonetheless. That’s what life has been like for the Manchester United faithful after Ferguson first announced plans to retire back in the 2001-02 season. The Scot had a change of heart back then, but at 71-years of age there is no going back this time around.

Speaking on the Manchester United website, Ferguson said: “The decision to retire is one that I have thought a great deal about and one that I have not taken lightly. It is the right time. It was important to me to leave an organization in the strongest possible shape and I believe I have done so. The quality of this league winning squad, and the balance of ages within it, bodes well for continued success at the highest level, whilst the structure of the youth set-up will ensure that the long- term future of the club remains a bright one.

“Our training facilities are amongst the finest in global sport and our home Old Trafford is rightfully regarded as one of the leading venues in the world. Going forward, I am delighted to take on the roles of both director and ambassador for the club. With these activities, along with my many other interests, I am looking forward to the future. I must pay tribute to my family, their love and support has been essential. My wife Cathy has been the key figure throughout my career, providing a bedrock of both stability and encouragement. Words are not enough to express what this has meant to me.

“As for my players and staff, past and present, I would like to thank them all for a staggering level of professional conduct and dedication that has helped to deliver so many memorable triumphs. Without their contribution the history of this great club would not be as rich. In my early years, the backing of the board, and Sir Bobby Charlton in particular, gave me the confidence and time to build a football club, rather than just a football team.

“Over the past decade, the Glazer family have provided me with the platform to manage Manchester United to the best of my ability and I have been extremely fortunate to have worked with a talented and trustworthy chief executive in David Gill. I am truly grateful to all of them.

“To the fans, thank you. The support you have provided over the years has been truly humbling. It has been an honor and an enormous privilege to have had the opportunity to lead your club and I have treasured my time as manager of Manchester United.”

Ferguson’s decision to retire comes at the end of his 27th season at the club, making him one of the longest serving managers in the world. He is also, arguably, the greatest club manager to have ever lived, a sentiment that has been echoed as testimonials pour in from around the world.

Cristiano Ronaldo, once of Man Utd and now of Real Madrid, tweeted “thanks for everything boss,” accompanied by a photo of the pair.

UEFA President Michel Platini called him a ‘visionary who had made a massive contribution to football across Europe.”

Sir Bobby Charlton said, I am director at United but I hardly do anything because we are winning all the time and it’s all down to Sir Alex Ferguson. He would get up in the middle of the night and travel 300 miles if he thought there was a schoolboy he could sign. He loves the game.”

Charlton is right, United do win all of the time, and this is why the red army will be so worried about the future without their leader. In the 27-years that Ferguson spent at the club he won 38-trophies including 13-Premier League titles and two European Champions League trophies.

So who will be the next person to walk into the biggest shoes the football world has ever seen?

The Everton Manager David Moyes is the clear favorite with most bookmakers. Not only does his contract run out at the end of the month, but also he is a fellow Scot that has long been touted by Sir Alex as a worthy successor.

The ‘Special One’ Jose Mourinho was thought to be on his way to Chelsea after his short reign at Real Madrid ended after elimination from the Champions League. Mourinho is the second favorite to join United.

After that you have the likes of Jurgen Klopp, the Borussia Dortmund manager who will be replaced by Pep Guardiola at the end of the season, followed by a few old boys with ties to the Red Devils including Molde manager Ole Solksjaer and current long-serving player Ryan Giggs.

Taking the age of Sir Alex into consideration, coupled with his love for the club, you have to think that there is no way that Ferguson would step down without a back up plan ready to kick into action. With that in mind, and considering the timing of Moyes contract renewal at Everton, he seems like the perfect choice.