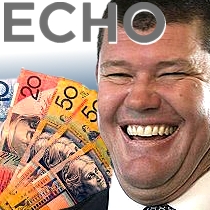 Crown Ltd. boss James Packer charted at #3 on Forbes Asia’s list of Australia’s 50 Richest individuals. Forbes claims Packer’s packet rose $1.5b to $6b in 2012, making him the largest gainer on this year’s list. Ironically, the fiscal gain came in the same year Packer shed a significant amount of physical flab, bolstering the old adage that one can never be too rich or too thin. Len Ainsworth, executive chairman of gaming machine maker Ainsworth Game Technology (and founder of Aristocrat Leisure), doubled his wealth in 2012, allowing him to top the $1b mark and score #22 on Forbes’ list.

DELOITTE CRITICIZED FOR INVOLVEMENT IN SYDNEY CASINO DECISION
Packer’s pursuit of a license for his planned Barangaroo casino in Sydney continues to cause conniptions. The panel appointed by NSW premier Barry O’Farrell to assess Crown’s ‘unsolicited proposal’ has asked auditors Deloitte to provide independent commercial advice, yet critics have pointed out that Deloitte’s Hong Kong branch audits casino operator Melco Crown Entertainment, in which Crown is a partner. Melco Crown paid Deloitte a total of $2.6m in 2011, which the NSW Greens party says presents a clear conflict of interest, but a gov’t spokesman said Deloitte was a global firm and that its “operations in each country are legally separate.” Deloitte was the author of an earlier report on the Crown proposal that the O’Farrell gov’t has so far refused to make public.

NO CASINO FREEBIES, O’FARRELL TELLS MPS
The litany of suggestions that the fix is in for Crown’s proposal – the refusal to put the second Sydney casino license through a public tender, a favorable tax rate and regulatory rewrites that aided Packer’s bid – has led O’Farrell to ban his party’s MPs from accepting any casino freebies from Crown while the proposal is being assessed. The Sydney Morning Herald reported that O’Farrell told his MPs over Christmas that he didn’t want to provide the media with any (more) reason to think the gov’t was in Packer’s pocket. The ban on accepting any casino hospitality extends to the current holder of Sydney’s only casino license, Echo Entertainment.

STAR CASINO HANDLING OF HIGH ROLLER’S MILLIONS PROBED
Echo’s Sydney casino, The Star, is in the news for having accepted over $4m in deposits from a gambler whose tax returns showed his personal income topping out at $124 in 2010. Australian Federal Police have launched a civil action against Sydney resident Li Ming Hu, who was found to have transferred a total of $11m to a Hong Kong company through his Australian bank accounts over a two-month period.

According to the Sunday Telegraph,a Star employee alerted police after Hu deposited $2.5m into a casino ‘front money account’ on Dec. 20, 2011, followed by a further $1.59m deposit the next day. Questioned by police in February 2012, Hu said he “won $1.6m in lotto in 2010.” Police later found $200k in the trunk of Hu’s car, which Hu claims was from clients in China that he was to transfer back to them in Hong Kong. Hu has yet to reveal these clients’ identities. Hu claims to own a printing business in Australia and a karaoke bar in China, but says the money is unrelated to those businesses. The AFP has accused Hu of money laundering and has asked the courts to force him to forfeit the sums in his accounts. The NSW Supreme Court is set to discuss the matter on Feb. 12.