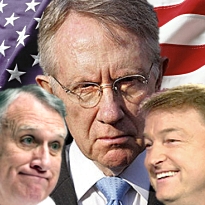 The online poker bill co-authored by US Senate Majority Leader Harry Reid (D-NV) and Sen. Jon Kyl (R-AZ) showed flickers of life Tuesday afternoon. At a Capitol Hill press briefing late in the day, an unidentified reporter informed Reid that Kyl and Sen. Dean Heller (R-NV) were saying that there was now sufficient GOP support to pass the online poker bill. A visibly annoyed Reid did his best hipster impression, feigning unbridled joy at the news: “Everyone listen to this. We suddenly have Republican votes on internet poker.” Reid then reverted to his traditional cranky self, noting that the support was a little late, given the jam-packed agenda of the lame duck session and the lack of a clear legislative vehicle to carry the poker bill across the finish line. “Two weeks before Christmas… Without being vulgar, what the hell would I put it on?”

Roll Call subsequently quoted Kyl as saying there would be sufficient GOP votes to overcome possible procedural hurdles online poker might face in the Senate, but Kyl went on to say there remained the problem of “how you ever get a bill like that up. If it ever comes up to the Senate, and it’s offered in the appropriate way — that is to say, not part of some bill that nobody’s going to vote for — then there’s no question about Republican votes in my view. You can’t put [poker] on the FISA bill. You can’t put it on the ‘cliff’ bill, whatever that is, so a lot of it depends on how it all comes up.” Kyl cautioned against Reid attempting to duct-tape the bill to a ‘Christmas tree’ bill that encompasses all manner of unrelated flotsam and jetsam legislation that for whatever reason couldn’t manage to pass on its own. Despite his positive comments, Kyl stated that poker was “not really, as they say in the military, the long pole in the tent right now.” (We think that’s Kyl’s way of saying Reid’s got a tiny todger, but only Mrs. Reid can answer that one.)

The Las Vegas Review-Journal’s Washington correspondent Steve Tetrault quoted Heller’s spokesperson Chandler Smith as saying Heller “believes there are sufficient Republican votes, and Sen. Kyl agrees.” Reid’s spokesperson Kristen Orthman said Reid and Kyl had met on Monday but Kyl hadn’t offered a hard number on how many GOP senators were willing to vote ‘aye’ on poker. Of course, even if the Senate were to find a way to pass Reid/Kyl, achieving the same affirmation in the House of Representatives is a whole nuther ball o’ wax.

NEW JERSEY, MASSACHUSETTS, CALIFORNIA INTRASTATE GAMBLING PLANS
If, as this site has long predicted, the Reid/Kyl bill fails to pass in the lame duck session, the momentum once again reverts to individual states. New Jersey’s Assembly is set to vote on the state’s online gambling bill on Dec. 17, with the Senate following three days later. Tuesday brought word that Massachusetts Treasurer Steven Grossman intends to ask state legislators to change laws to permit the state lottery to offer online ticket sales as well as online social gaming and fantasy sports, with poker a possibility further down the line. Grossman, who has already gone on record with his opposition to Reid/Kyl, said he is preparing to release the findings of a special task force he set up to determine the best way to proceed. “Internet gaming is going to be a fact of life and is going to have an impact on lotteries all over the country in the relatively near future. We want to move as quickly as we can, as appropriately as we can.” Then there’s California, where state Sen. Rod Wright (pictured right) is promising to reintroduce his SB1463 online poker legislation when legislators return to work in January. eGamingReview recently reported that Wright planned to reintroduce his legislation in the same form as last year, despite the fact that Indian tribal opposition to the bill resulted in it being unceremoniously yanked off a Senate committee agenda in June, never to be seen again.

Chief among the tribes’ concerns was Wright’s insistence that state racetrack operators like Churchill Downs and Betfair TVG be included on the list of eligible online poker operators, despite having no history of poker involvement, unlike tribal casinos and card rooms. But the dissolution of the California Online Poker Association in October appears to have convinced Wright that the bill’s path to passage may be less obstructed this time around. Either that or Wright is planning to use the racetrack eligibility as a bargaining chip in (pardon the pun) horse trading with tribes on other potential deal-breakers. Watch this space…