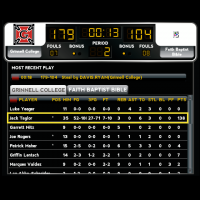 If you told us that the NCAA record for most points in a basketball game belongs to a 5’10” sophomore from Grinnell College – Grinnell College – named Jack Taylor, we probably would’ve stared at your face for a full minute before raising our eyebrows and asking

But after last night’s electrifying performance, the name Jack Taylor will live in history as the owner of the highest scoring performance in a single NCAA game in history. Or at least until someone bests his 138 points.

Yeah, we said 138 points. That’s how many points Taylor inexplicably scored in Grinnell’s 179-104 shellacking of Faith Baptist Bible. It’s also a total that easily blew Frank Selvy’s 100-point Division I record that was set way back in 1954 or even the 113 points Clarence “Bevo” Francis scored against Hillside College also in 1954.

Incredible as Taylor’s performance is, we have to put a proper context into it because when you see the box score from the game, you’ll get a good idea why and how he managed to rack up that many points. For starters, Taylor achieved that total by shooting the ball a staggering 108 times in 35 minutes of action. 108 TIMES! Do the math and that’s 3 shots per minute, something that’s an achievement in it of itself given the 35-second shot clock in college basketball. Here’s another nugget: of the 108 shots Taylor attempted, 71 came from the three-point line where he made 27 of them. Taylor also made 25 of 37 shots from inside the line while also hitting 7 of 10 free throws to account for the 138 points.

Lost in Taylor’s performance is the fact that the previous Division III record for most points scored by a player in a game belonged to Griffin Lentsch -Taylor’s teammate at Grinnel – who scored 89 points last year. Lentsch also played in last night’s game, accounting for a peanut total of 7 points.

Don’t get us wrong, the 138 points is remarkable any way you look at it. But it’s hardly surprising once you take into account the fact that he shot the ball 108 times. Put it this way: if you gave Kobe Bryant the green light to jack up the ball 108 times in a single game, what’s the over/under for his points total?

We’ll put it at 200 and hope that the Mamba’s arms don’t fall out of his shoulders by the 4th quarter.

Speaking of which, we’re wondering how this kid must be feeling after a game like that. If he can still move any of his limbs even an iota, then we’d be very impressed.