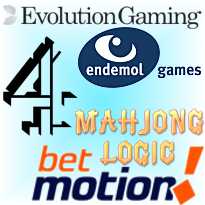 Endemol Games has inked a three-year deal with live dealer specialists Evolution Gaming to bring the Deal Or No Deal brand to the live online market (excluding the UK). Evolution will be tasked with developing new live dealer casino games based on the Deal Or No Deal concept – basically, asking a player to say ‘yes’ or ‘no’ – that will be distributed across Evolution’s vast network. Evolution creative director Richard Hadida said Deal Or No Deal would offer “huge potential to attract new players, new demographics and new revenue streams” while CEO Jens von Bahr said there were “many more brands and multi-channel opportunities” the two companies could explore together. We like to think the lawyers that negotiated the deal did so by concealing their offers in tiny valises, then daring the other to accept or decline, sight unseen, while the anxious CEOs of each company perched on the edge of their boardroom seats, helpless to influence the outcome.

Mahjong Logic has made inroads into the Latin American market via a deal to add its peer-to-peer product to BetMotion’s offering. The Latin debut means the addition of two more language options – Spanish and Brazilian Portuguese – to the product’s current list of English, Japanese, Chinese, Thai, Korean and Vietnamese. Mahjong Logic CEO Jonas Alm noted the growing ranks of Asian ex-pats in Latin America – Brazil alone has 1.5m ethnic Japanese – while BetMotion managing director Martin Benitez says his player base has been clamoring for mahjong and that the partnership would assist “diversification of our game product.”

William Hill, Ladbrokes and Bet365 will be the new commercial partners of Channel 4’s racing coverage in 2013. Beginning next year, Channel 4 will be the UK’s only terrestrial broadcaster covering racing, with 87 race days on the sked, including Cheltenham, the Grand National, Royal Ascot, Glorious Goodwood and more. Channel 4 selected its betting partners for 2013 via a blind auction, and while it has so far declined to give public details of the winning bids, MediaWeek quoted C4’s agency principal Chris Braithwaite describing the process as “transparent and fair and overseen by an independent adjudicator.” There will be another blind auction in April when Bet365’s existing live odds partnership with C4 expires.

Austrian bookmaker Admiral Sportwetten has signed a deal with live racing broadcaster SIS to bring international greyhound racing to the video screens in 12 of the bookie’s 200 Austrian betting cafés. The SIS greyhound channel, which was launched last summer, features more than 27k dog-eat-dog races per year.

UK- and Hong Kong-based gaming operator Samvo Group has tapped Swedish sports betting market-makers Betting Promotion to provide it with “a range of markets for a specific sport outside Samvo’s current area of expertise.” Betting Promotion recently claimed to have ridden to the rescue of some former operators left high and dry after International Game Technology announced it was shutting down the Entraction Poker Network.