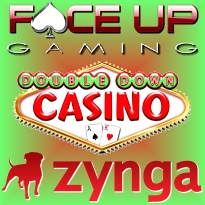 Face Up Entertainment Group has announced the alpha testing phase of the Facebook integration of its proprietary poker platform (FaceUpGaming.com), which allows players to interact via live video streaming while playing with virtual chips for real-world cash and prizes. Face Up CEO Felix Elinson anticipates closed beta testing “within 45 days.” The company says games like backgammon, chess and checkers will be “logical additions” down the road.

Social game mavens Zynga have announced a raft of new outside developers signing on to its Zynga.com platform. In addition to RocketPlay’s social sports betting game Sports Casino, Zynga.com now features 50 Cubes’ Fashion Designer, Majesco Entertainment’s Mini Putt Park and Sava Transmedia’s Rubber Tacos. Eight other game developers will soon be releasing product via Zynga.com, including Antic Entertainment, Big Bite Games, CrayonPixel, Eruptive Games, JamRT, The Method, Playnery and Tiki Games. By rolling out the third-party welcome mat, Zynga hopes to fill the gaps in between its own game releases, which haven’t exactly set the world on fire lately. Last week saw the release of Farmville 2, which is basically the originally Farmville with a 3D twist and some cute animals thrown in. Few are (groan) betting the farm on this tepid sequel restoring Zynga’s slumping stock price to its former heights.

Many see Zynga’s much-anticipated move into real-money online gambling as a potential game-saver, but others aren’t so sure. Ken Sena, an analyst at Evercore Partners, issued a bearish report this week claiming the addition of real-money gambling (poker and casino) to Zynga’s offering would be worth at most $300m in annual revenue and $135m in annual earnings, or $0.15 per share. Even that result assumes Zynga achieving top-three operator status in markets beyond US borders, which is far from guaranteed. As such, Evercore’s price target on Zynga shares remains $2. Zynga closed out the past week’s trading at $2.88.