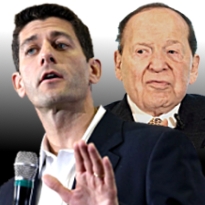 Paul Ryan, the Wisconsin congressman tapped by Mitt Romney to be his vice-presidential running mate in the 2012 federal mud-slinging contest, isn’t wasting any time stepping into the role. On Tuesday evening, Ryan will head to Las Vegas for his first official meeting with campaign donors. The event is being held at the Venetian, and the gaming joint’s owner – Las Vegas Sands chairman and GOP bankroller Sheldon Adelson – is expected to be in attendance. Not in attendance will be the nation’s media, who’ve been barred from covering the event because – as a Romney aide told the Associated Press – the event is a “finance meeting” rather than a fundraiser.

Tomato, tomahto… We suspect the desire for privacy is to avoid a photo op of Ryan – who, despite being a devotee of atheistic libertarian icon Ayn Rand, likes to publicly champion his Catholic faith – kneeling to kiss Adelson’s ring, lest this apparent transferring of affections piss off the Pope. FYI, Rush drummer Neil Peart, who has also espoused Randian free will sentiments, recently told Macleans that it’s “impossible to follow the teachings of Jesus Christ and be a Republican. It’s philosophically absolutely opposed.” Ponder that the next time you hear a moralizing GOP’er saying God hates gambling.

That Nevada casino execs would prefer to see Romney rather than Barack Obama seated in the oval office come 2013 is hardly a secret, but the depth of their support for the GOP may still surprise some observers. Forbes recently crunched Federal Election Commission (FEC) filings from the current election cycle that showed campaign contributions from individuals (and their relatives) with direct ties to Las Vegas casinos totaled $43m – $42.4m of which went to Republicans, while just $216k went to Democratic political action committees.

What would a Romney-Ryan presidency mean for online gambling? Not much, at least in terms of altering the status quo at the federal level. This February, perhaps in an early bid to curry favor with online gambling opponent Adelson, Romney said he didn’t support legalization of online gaming because of the “social costs.” Ryan’s been cagier regarding his online gambling stance, but unless President Romney gets impeached after trying to move his previously undisclosed sister-wives into the White House, the opinions of US vice-presidents traditionally aren’t worth John Nance Garner’s “bucket of warm piss.”

Nevada casino support aside, the likelihood of Romney ever getting the chance someday to strap a dog to the roof of Air Force One appears dubious. Bookies outside the US – in a display of the kind of freedom so infrequently observed in the supposed land of the free – allow wagering on events such as political elections and are strongly suggesting Obama is on track for a second term. Since Ryan was announced as Romney’s running mate, Paddy Power shortened its odds on Obama’s re-election from 8/13 to 2/5. On the flip side, InTrade contracts backing Romney rose in value after Saturday’s Ryan announcement. Prediction markets have earned a reputation in recent years as a better bellwether of electoral outcomes than opinion polls, although they failed to anticipate the recent US Supreme Court decision upholding Obama’s health care plan, nor did they get it right on Ryan winning the Veep-stakes, so who knows? While we wait for the only poll that matters in November, here’s a singalong for Rand-lovers…