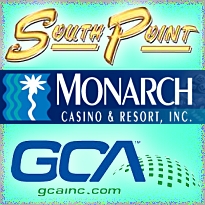 Assuming the NGC finds no skeletons in South Point’s closet, owner Michael Gaughan may make good on his prediction that his site would be the first to deal a real-money online poker hand in Nevada. Gaughan’s representatives told the GCB that once the state’s independent testing labs finish approving South Point’s technology – a second and final round of approval could come later this month – real-money field tests could begin as early as October. But GCB chairman Mark Lipparelli apparently wants an “administrative review” immediately before the company goes live, just to make sure all the I’s are dotted, etc. CardPlayer reported that in addition to South Point deploying “unique, patent-pending” geo-location technology to restrict users to within Nevada’s borders, the company would also allow online poker deposits and withdrawals via the cash cages at its brick-and-mortar operation.

Also garnering GCB operator approval on Wednesday was Monarch Gaming, which operates the Atlantis Casino in Reno. Unlike South Point, which already has its software component lined up in-house, Monarch has yet to strike a deal with an online poker outfit for a Nevada joint venture. Monarch CEO John Farahi told the GCB that the company was still searching for the right partner, but offered no timeframe as to when such a deal might be struck. In approving Monarch’s application, the GCB regulators made sure the company understood that the license could expire within six months if Monarch still wasn’t ready to go online.

Finally, the GCB approved an online service provider license application by payment processing outfit Global Cash Access (GCA), which currently provides automated teller machines and other cash services to a host of Nevada casinos, On Tuesday, GCA announced it had signed a letter of intent to forge an alliance with New York-based Live Gamer, a “leading independent wallet, analytics and media supplier for the social gaming space” which has deals with Facebook, Electronic Arts and Sony Online Entertainment. Terms and scope of the deal weren’t available, but GCA CEO Scott Betts told analysts on Tuesday that the pact is specifically aimed at becoming the cash-moving default option for the US online poker market, whether state-by-state or on a national basis. VegasInc. quoted Betts as saying he didn’t know “where internet wagering is going to go. Will players in the social gaming space move into the wagering space? If it does, [Live Gamer] have a tremendous customer portfolio.”