A Chinese man has proved that watching football can kill you after he stayed up for 11 straight days during the Euro 2012 championship. The man, from Changsha in China, was aiming to watch every single game during the tournament and to do so needed to stay awake for a whopping 16 days in the early stages of the tournament. His bid ended after seeing Italy advance past Ireland with MSN reporting: “After watching Italy defeat the Republic of Ireland, the 26-year-old fan went back to his home in Changsha, took a shower and fell asleep. Xiaoshan never woke up.

Sources claim that the combined effects of alcohol, tobacco and sleep deprivation were to blame for his untimely death. Xiaoshan’s friends were left shocked after learning of his death, stating that he lived a ‘relatively healthy life.’”

Although the feat was rather ill advised we salute this anonymous man for his drinkin’ and carryin’ on and give the man posthumous honor of a place in the club.

For England fans wanting a“pick me up” after another depressing penalty shootout loss need only send their thanks to the sneakiest flasher these shores have ever produced. When Alessandro Diamanti stepped up to take a penalty for the chance to send the home side through, one quick-witted England fan behind the goal dropped his shorts to reveal all. Unfortunately Diamanti scored and our cocksure friend will be forever known as the nearly man (see foot of page).

All the Italians could muster in reply to celebrate their win was a field of crops trimmed to resemble controversial striker Mario Balotelli’s head. We’re not quite sure it outdoes either of the first two members of the carryin’ on club but we’d always accept Mario if he wanted to come in to the club thanks to his past exploits…and as every Englishman knows, the Italians are still in the competition. 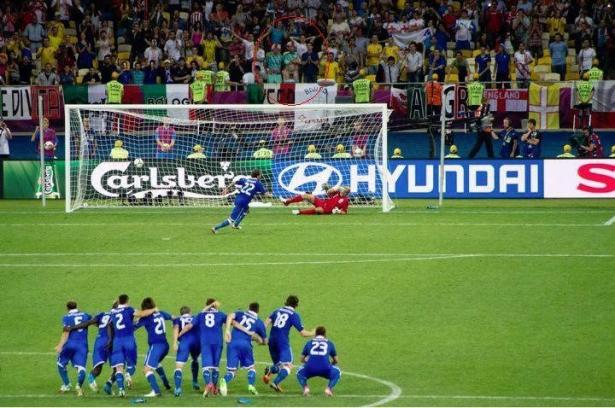