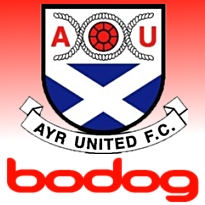 Bodog Brand has renewed its sponsorship deal with Scottish football club Ayr United for a second successive season. The team, from Calvin Ayre’s ancertral home, will have the Bodog logo plastered over the front of their jerseys.

Upon signing the extension, Calvin said: “I’ve always wanted to make sure my life was adrenalin-packed and this year has been no exception to put it mildly, so I’m glad that Super Ayr United operate with a similar philosophy and as a result I’ll be backing them to go straight back up again next season.”

He added: “I had a blast on my visit last year and got stuck into the Hendrick’s Gin pretty hard as well as taking a day at the racetrack to have a bet or two before heading to Somerset Park. This summer’s press conference will be another good show as we unveil the new strip and no doubt a few girls as well.”

As we’ve seen this season, supporting this club is like a white knuckle-ride that you won’t forget. Since the sponsorship was unveiled last summer the club has been through one promotion and got to two Cup semi-finals (not even Calvin’s good luck message could get them through though!), beating four Scottish Premier League teams along the way. One of their number, Kiegan Parker, even picked up the goal of the season award for the whole of Scotland. This was all before being relegated once again. Guess that means more wins next season though!

Hugh Cameron, commercial director at Ayr United, added: “Its great that Calvin and the Bodog brand will be coming back for more of the Ayr United roller-coaster and with a new manager on-board I hope we can go back up to Division One next season.”

“Bodog’s ability to promote the club on a global level saw us attract record shirt sales last season including our first shipments to Asia which is just what this club needs and I’ve no doubt it will be similar next season. In the meantime I look forward to the madness that is the Bodog kit launch later in the summer.”

Here’s to hoping for another season of unrivalled excitement on the Ayrshire coast and maybe, just maybe, we’ll be popping the champagne corks this time next year. In the meantime we’ll leave Somerset Boab to play us out with his tribute to goal of the season winner Parker. Take it away me wee beauty…