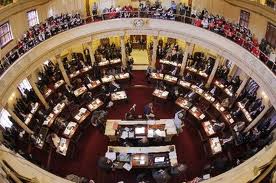 A New Jersey Senate Panel approved a revised bill yesterday allowing the state to wager money online. Hurray…right? Wrong. Following the meeting, an Assembly committee hearing did not lead to a vote, meaning online poker may not become a reality in New Jersey until November at the very earliest.

As NorthJersey.com reports, Governor Christie said that he was waiting for guidance from his state Attorney General’s office about whether residents state-wide would have to vote on the issue in a November referendum before he would sign an online gaming bill.

Last year the Legislature passed bills that would legalise online gaming, with a 32-4 vote in the state Senate and 63-11 in the Assembly. But Governor Christie vetoed the measures last March, citing “legal and constitutional concerns.”

Assemblyman John Burzichelli, D-Gloucester, vice chairman of the Regulatory Oversight and Gaming Committee, said in the report that the panel was going along “two tracks,” depending on whether a referendum would be held.

“We want to establish a clear legislative record to see if we need to go to the voters,” he said, stating that the group would meet again next week to hear from an expert on the state Constitution.

Lobbyist, Barbara DeMarco, added that the horse racing industry might sue if the Legislature pass the current version of the Internet gaming bill and online poker becomes the main source of wagering.

Last November, residents in the state voted in favour of legalising sports betting with approximately 65% approval. If it passed and online gaming is legalised, the state could permit electronic gaming at parlors at the state’s racetracks to attract more visitors.