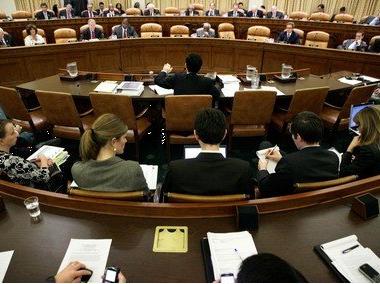 After a week delay, New Hampshire’s House Ways and Means Committee held a public hearing on the expansion of gambling casino bill yesterday in Concord.

As salempatch reports, the meeting was “well-attended” and “strongly-debated” with members of both sides of the expanded gambling debate making their cases on the bill and its proposed amendments.

One amendment in particular – which would expand the number of licenses awarded in the bill from two to four based on region and local approval – was debated heavily, especially by Sen. Chuck Morse, R-Salem. Speaking in favour of the HB 593 passage, he said the bill would secure the $80 million per year that residents spend gambling across state lines.

“In doing nothing and not passing HB 593, New Hampshire is at the risk of losing revenue we already rely upon to provide our state services,” Morse said.

Sen. Lou D’Allesandro, D-Manchester agree, and added: “The time has come. Massachusetts has done it and New Hampshire has an opportunity for job creation.”

However, the gambling bill supporters by no means had an easy ride at the debate. Rep. Robert Kingsbury, R-Laconia, said putting people on casino payrolls in New Hampshire adds no value to the state. “What is it about Atlantic City that you wish inflict or install on Salem?” he asked.

Jim Rubens of the Granite State Coalition Against Expanded Gambling who railed against the legislation also reared his ugly head. He said that the bill would create an excessive amount of tax for the state – the biggest since the Business Enterprise Tax was introduced. He also remarked that no other industry in the state would be as tied to the Legislature’s actions as casinos would be: “It leads to corruption,” he added.

In defence of the legislators, Committee Chairman Stephen Stepanek, R-Amherst, slammed Rubens’ corruption remark, retorting: “This is a citizen Legislature and we are here because we’re concerned about New Hampshire and New Hampshire values.”

Online reports suggest the passing of the bill looks increasingly unlikely. Nevertheless, an executive session for the bill will be held by the committee once again in Concord next Tuesday.