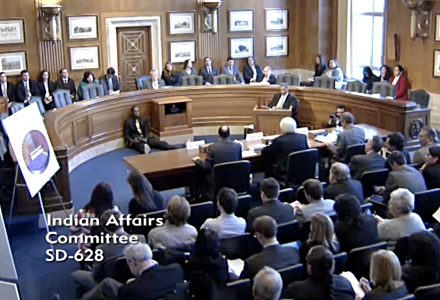 On Thursday, the Senate Committee on Indian Affairs held its second hearing on internet gambling in the past three months. This confab was called to hear testimony as to the Department of Justice’s revised opinion on the scope of the Wire Act, and, specifically, “What’s at Stake for Tribes.” Representing the federal government were Committee Chairman Daniel Akaka (D-HI), vice-chair John Barrasso (R-NY) and Tom Udall (D-NM). 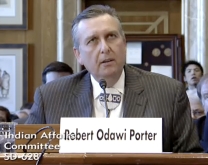 The first panel of witnesses was a solo affair starring Robert Odawi Porter, president of the Seneca Nation of Indians. Porter said the topic of the day revolved around two pressing needs: to protect Indian jobs and to preserve Indian rights to participate in internet gaming. “Indian nations not only demand a seat at the table, we insist that we already own our own table, and we should not have it stolen from us as has too often been the case in the past.” Porter warned the Committee of a “brazen power grab” by Nevada casinos, and rejected the notion that non-Indian gaming companies had “any technological or business savvy beyond what we have.”

Porter couldn’t say that online poker via international sites had “induced tremendous harm” to Seneca gambling operations, but warned of a “certain slippery slope element” if other channels were introduced by states. In Porter’s view, if state governments go forward with their own intrastate online gambling plans, the biggest challenge for tribes is that “many of our [gambling] agreements are tied to a geographic exclusivity.” Opening up those geographic zones to competition via internet gambling “presents the greatest challenge for the Congress in marshalling a solution to protect those geographic-based businesses.”

By way of example, Porter said that under their existing compact with the state of New York, the Seneca Nation enjoys a 16-county slot machine exclusivity right, for which it pays “25% off the top” to state and local governments. If Congress were to simply open up igaming without regard to that existing arrangement, the result would be “serious injury and impairment” to the Senecas’ contractual relationships with the state, the tribe’s creditors and business partners. Such a scenario could inflict “a tremendous degree of economic injury to us and significantly destabilize if not destroy our businesses.” 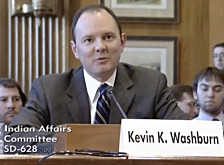 First up on Panel #2 was Kevin K. Washburn, dean of law at the University of New Mexico, Albuquerque. Washburn opined that the DoJ opinion has “forced Congress’ hand.” Indian gaming was “getting government off the hook” for federal funds that would otherwise need to be expended, underscoring the need to “protect this federal resource for tribes” that has been “so important for self-determination and self-governance.” If states with tribal compacts got involved in internet gaming, the resulting loss of exclusivity would require tribes to be compensated. Tribes would essentially be off the hook for paying their mandated revenue shares to states.

Washburn described the historic US approach to gambling as “schizophrenic,” with “50 state laboratories that get to decide gaming policy each on their own.” Lotteries, VLTs and Indian gaming, which Washburn claimed represented nearly 60% of all US gaming, were “all governmental forms of gaming” that indicated “a common belief” that gaming should be a “public resource.” that helps “develop governmental resources.” States should be allowed to opt-out of a federal scheme, but since most states agree on the harmful aspects of gaming (problem gambling, money laundering, consumer protection, etc.), Washburn said it would be “far more efficient to have one entity at the federal level” handing gaming regulation. 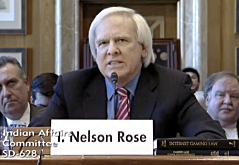 Next up was I. Nelson Rose, senior professor at Whittier Law School in Encino, CA (and CalvinAyre.com contributor). Rose said his reading of the courts suggests that tribes taking bets from patrons not physically located on Indian land is possible, but it would be a privilege granted by the state, not a right. Rose reminded the Committee that gambling decisions have historically been made at the state level. Federal gambling laws were essentially enforcement measures, and all but two of these (with the exception of the Wire Act and anti-lottery statutes) require gambling to be illegal in a particular state for a federal statute to apply. Now with the Wire Act “gone”, there is nothing preventing states from going down the intrastate online gambling road.

Six state lotteries are already selling lottery subscriptions online. Rose said these states could now choose to sell individual tickets online, but if they put ‘scratchers’ online, the effect would to create an online slot machine, which would threaten tribal exclusivity deals. Rose feels larger tribes have the political power necessary to protect their state compacts, but smaller tribes would be “out of luck” without some kind of federal protection.

Rose believes that, in many states, established local operators will get the igaming licenses. However, Rose expects a large state like California to demand $100m license fees up front, a sum that state tribes and card clubs don’t have, but big Nevada outfits (like Caesars Entertainment) do. Some tribes have enough political power to demand that if there are (say) three licenses issued by a state, a tribe or a consortium of tribes will get at least one. But, again, smaller tribes would likely get left behind. 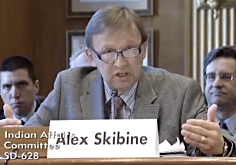 Rounding out Panel #2 was Professor Alex Skibine from the University of Utah college of law. Skibine said tribes that already have state compacts should be legally permitted to offer internet gambling. “No reason to treat internet gaming as a new form of gaming. If poker is allowed, internet poker should follow.” States might try to restrict tribes to wagering that originates on Indian land, but Skibine said this limitation “makes no sense when it comes to internet gaming, since internet gaming is borderless.”

Skibine said federal legislation was necessary “because of the nature of the internet”, but it would have to incorporate four points. First, it would need to continue to recognize Indian tribes as sovereign governments with the authority to regulate gaming occurring on their lands. Second, tribes should be able to conduct internet gaming with customers located in any other jurisdiction that allows it, even if outside the tribe’s state. Third, there should be no state taxation of tribal gaming revenues, and fourth, tribes shouldn’t be required to amend existing compacts with the states to specifically include igaming. Panel #3 began with Poker Players Alliance litigation support director Patrick Fleming, who said the PPA was committed to a “broad, cross-border market for online poker … that fosters as much competition as possible between game operators, and that absolutely includes the very important tribal gaming operators.” Fleming said the DoJ opinion had opened up a “Pandora’s box of possibilities” but that internet poker was “not a threat to tribal gaming interests” but an opportunity.

Fleming claimed that poker represents a mere 1% of tribal gaming revenues. Poker brings people into tribal casinos but is not the game that supports their existence. Fleming suggested that internet poker could benefit tribal interests by bringing people into casinos to enjoy the social aspect of game, as opposed to state lotteries offering online scratchers, which would directly compete with tribal interests. 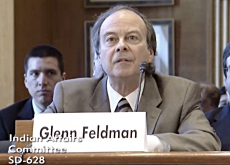 Last to speak was Phoenix attorney Glenn Feldman, who has served as outside general counsel to the Cabazon Band of Mission Indians since 1979. Feldman said legislation that limits or restricts the ability of tribal governments to reap the benefits of internet gaming is simply unacceptable, but tribal governments need to be “smart and flexible in their thinking on the issue”. Feldman said legal internet gambling in the US was “inevitable;” therefore, he advised all his tribal clients that “just saying no is not an effective strategy for dealing with inevitable change.”

While Feldman maintained that tribes needed to be “full and active participants” when legislation was crafted, he said there was no need to rush legislation. Feldman didn’t agree that the DoJ opinion would immediately “open the floodgates” and thus Congress would be making a “serious mistake” if it were to rush into enacting federal legislation “without the careful deliberative process the subject deserves.” Feldman drew parallels between today and the 1987 Supreme Court California v. Cabazon decision that led to the enactment of the Indian Gaming Regulatory Act (IGRA). Twenty months passed between the Cabazon decision and IGRA’s enactment, and Congress had been considering Indian gaming regulation for three years prior to the Cabazon decision.

The Senate hearing concluded without any formal action being taken. A third House of Representatives hearing on internet poker was rumored to be scheduled early this year, but no date or speaker list has yet been published.