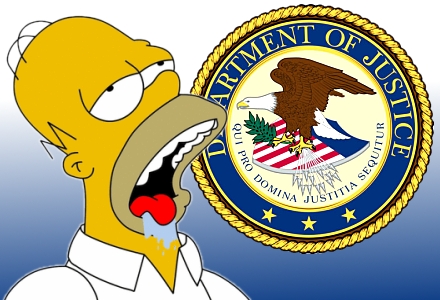 “I’ve got this thing and it’s fucking golden.” That is a quote by Illinois’ disgraced, impeached, and convicted former governor “Hot Rod” Blagojevich in reference his ability to appoint the replacement for President Barack Obama’s Senate seat following his 2008 election victory. Blago saw value in the appointment and refused to give it away “for fucking nuthin’”. He now faces 14 years in federal prison for the inept and illegal handling of that appointment, and other numbskull actions taken to enrich himself and his cronies.

For many state legislatures, governors, lottery directors, lottery vendors and gambling vendors of all types, the DoJ flip-flop on what types of gambling was prohibited by the Wire Act is also “fucking golden”. The race into the internet gambling space is on. Legislation is being drafted in state capitols across the United States by legislatures who are billions in debt and are looking for any revenue stream to plug the holes in their hemorrhaging budgets.

State government officials are already counting the potential windfall of this golden thing, but they better keep their eyes on the prize and pass enabling legislation immediately. State control of the internet gambling space has an expiration date and the clock is ticking. Should the states not act quickly, the good old boys from Vegas will get their toady Harry Reid to push a bill through Congress. That takes this golden thing away from the states and gives it to the Vegas casino companies, who already have their PR machines in overdrive trying to block intrastate expansion at the same time their governmental affairs folks are fine-tuning Reid’s bill for him. States have to move at lightning speeds to pass enabling legislation and governors have to put aside their concerns about voter backlash and sign these bills ASAP so they don’t give this away “for fucking nothin’”.

The DoJ opinion itself has the potential of having a very short shelf life. What does Mitt Romney do if elected in November? Does the DoJ un-flip-flop to their previous position? Your guess is as good as any. But it certainly could happen and it might be a way for Romney to throw a bone to the rabid dogs in the Republican Right as an early good faith action of is administration.

What are the intentions of the horse racing industry? Horse racing has been sliding towards the abyss of irrelevancy for decades. Beaten down by competition from lotteries and casinos, they have survived by fueling the industry with funds from non-traditional sources. By seeking subsidies from casinos and state governments, by placing casino operations at their racing facilities, and by allowing internet betting on horse races through account deposit wagering (ADW) platforms they are providing revenues to the industry but not at levels that can stop the slide, at least not for everyone. The horse racing industry knows the DoJ decision is a fucking golden thing and they want it desperately as additions to their ADW platforms. ADW was the ONLY LEGAL online gambling permitted pre-DoJ-flip-flop. They have standing in the space, and they have an existing customer base. It makes sense that they would seek to add other games to their existing ADW platforms.

The question becomes HOW they get this done. Do they follow the intrastate model and work with state legislatures to pass enabling legislation that includes them? Or, do they join with the Vegas boys and use their clout with Republican Senate Leader Mitch McConnell to grab their pieces of gold? I’d put my money on the latter. McConnell is from Kentucky. Churchill Downs is in Kentucky. Churchill Downs’ VP for government affairs used to work for McConnell and, coincidently, for nine years with the American Gaming Association. From my experience, you don’t employ a guy with those credentials if you don’t plan to leverage them. And, it has been reported widely that McConnell worked closely with Reid on previous versions of federal poker bills. Why would Churchill stop in mid process and move to an intrastate model? They aren’t, at least not in Illinois where their lobbyists are doing everything within their means to block discussions on internet gambling.

So, what happens with this fucking golden thing? Who wins and who gives it away for fucking nuthin’? We’ll have to wait and see. I have intrastate as a 2-1 favorite.

Steve Brubaker is a longtime horse racing lobbyist from Illinois.

Steve Brubaker, a horse racing lobbyist from Illinois, submitted the following article to CalvinAyre.com. To have your voice heard, please submit article and op-ed ideas to Bill Beatty.