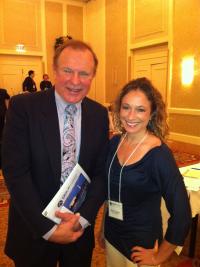 The first day of the Washington, DC based Digital Gaming & Lottery Policy Summit is just finishing up as delegates enjoy a few cocktails thanks to organizers and online gambling industry vets Mark Balestra and Sue Schneider.

There were over 100 delegates in attendance today, roughly 1/3 representing US state lotteries and the remaining 2/3 consisting of online and land based operators, suppliers, regulators, senators, lawyers and media. About ¼ of the total crowd has been involved in the iGaming industry for over five years, the rest very eager to learn the ropes.

Today’s keynote speech was delivered by the good natured and all around awesome Raymond Lesniak, State Senator of New Jersey. Lesniak made it quite clear to the crowd that he is not afraid to “fight against the big guys”, meaning the NFL and Harrahs, after which he promptly asked if anyone in the audience was from Harrah’s and then laughed. (No one from Harrah’s was in the audience, but damn, that would have been funny).

Lesniak is pretty confident that his gambling bill will pass and made the point that the newspapers already set the lines for sports games and what are New Jersey citizens supposed to do, fly to Vegas and place the bet? I think not. He also added that there were plenty of bets placed on the NFL games played at London’s Wembley stadium, so why can’t these bets happen in the US? Very hypocritical of the NFL. Lastly, NJ already has online gambling for horse racing, so why the hell can’t New Jerseyans gamble on other things as well?

The Senator signed off with the promise that he should know within a month if Governor Chris Christie will sign or veto the bill, but has every reason to believe that Christie will sign. Online gambling on sports is where the real money is for NJ so this bill would save the gambling industry in NJ plus create a load of new jobs.

A number of topics were covered throughout the day after the keynote, below are some of the more key points revealed and discussed:

+Lloyd Levine of Continent 8 Advisors estimates that 11 million US residents played poker online between 2010-2011, pre Black Friday. Post Black Friday there has been a dip in the numbers but new offshore companies will fill the gap, meaning, Black Friday simply “reshuffled the deck once again”.

+Levine also added that the focus should be on what we can do now (ie free play sites), not wait until regulation is passed because we will lose against the Vegas land based casinos.

+Mark Zwillinger confirmed that there is no official policy from the DOJ on how they define illegal gambling and they like it that way. He believes “the DOJ is not concerned about consumer protection, rather they are focused on companies that blatantly flaunt the law and have the smell of traditional gambling”.

+Barry Boss warned the crowd not to take the silence of the DOJ as a green light and that their definition of “gambling” is non-exhaustive. He used the example of the Kenny Rogers song called “The Gambler” which is actually about poker, meaning, you can throw that “poker is not a game of chance, its a game of skill” argument out the window.

+National Council on Problem Gambling’s Keith Whytle pointed out that accessibility does not mean that online gambling addictions will increase as addicts will always find a way to lose their money- they will play on offshore sites, they will cross state lines. Sounds like Whytle and our friend Patrick Basham see eye to eye on this one.

+In the rather heated Global Regulatory Standards panel, Mark Davies stated that preventing credit card use for gambling in the US does not address the heart of the problem- the US must regulate to ensure safety and security of the consumer.

+Iowa State Senator Jeff Danielson is pro-online gambling and explained that there is no budget problem in Iowa and that he wants to regulate online gambling so Iowans can engage in online gambling safely and securely. His motives are not to creative revenue.

+Melissa Riahei of US Digital Gaming explained that federal law would be very difficult to apply to 50 states that have different gambling environments and stakeholders. Although fragmented (sound familiar, EU?), state by state is the most likely way that regulation will happen in the US.

+On the other hand, Dan Walsh of Greenberg Traurig thinks federal regulation is the way to go- without it, players will simply go and play at offshore sites because the smaller states cannot provide players with the gambling environment they are used to.

+Senator Danielson agrees with Walsh and believes that a federal bill makes sense but that its wishful thinking. In his words, “Congress is so bound up they cannot even pass gas, let alone a bill”.

In summary: don’t hold your breath for that federal bill.

Stay tuned for DGLP day two highlights and you can follow @casinocityvin for updates throughout the day as they happen!