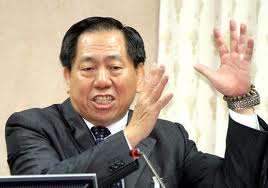 The most prominent security agency in Taipei, the National Security Bureau (NSB), has today expressed its feeling about the influence “illegal gambling” could have on the outcome of the January 14 presidential and legislative elections.

Hoping gambling would “not interfere” with the electoral process, NSB Director-General, Tsai Teh-sheng, stated he would be keeping a close eye on it all. He said: “Betting is an important element which can influence and change Taiwan’s elections, so the NSB will continue to observe the situation related to gambling.”

His deputy, Lin Hui-yang, was keen to notify everyone that if the NSB obtained information about election betting, it would hand it over to the police and to prosecutors. Harsh?

Tsai told lawmakers that his organisation did not have the authority to intervene in illegal gambling, but would nevertheless keep a “close watch” on such activities. He also stated that people participating in the election betting are “rather extreme,” and said that the disappearance of the practice would be a good thing.

Tsai’s statement today follows allegations made in last week’s Next Magazine alleging that President Ma Ying-jeou held a secret meeting with bookie Chen Ying-chu in Chiayi on September 10. The story also led to allegations that Ma was trying to turn around falling poll results by having bookies sympathetic to the ruling party influence the election.

According to a report by Next, Chen operates an international online gambling company and is in charge of a network managing the gambling on domestic elections. The report went on to say that Ma had received $3.3 million from Chen, a figure which the DDP later raised to $9.9 million.

What did the president have to say for himself? Well, he affirmed that as president, it deemed it difficult to take the media to court. Instead, he sued the DDP and its spokesman Liang Wen-chieh for defamation in the capacity of a private citizen, demanding a compensation $66,000. If you can, why not?