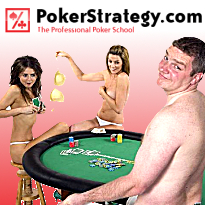 Leading European poker training site PokerStrategy is making a push into the US market. Historically, players could only qualify for access to PokerStrategy’s vast array of training resources by opening up an account with one of PokerStrategy’s ‘partner’ online poker rooms and generating rake via an affiliate program. PokerStrategy now intends to offer US players four different levels of subscription-based access. ‘Silver’, the lowest level, starts at $7 per month, compared with the $333/month that comes with the aptly named ‘Diamond’ status. CSO Lutz Enke told PokerFuse.com he hopes this change to PokerStrategy’s business model will mean it won’t “collide with the legal view of the US authorities.”

UK poker pro James Williams has signed on with iPoker Network skin Poker Encore. Predominantly an online player, Williams placed second at the 2009 GUKPT Blackpool Main Event and won the Sky Poker Tour Grand Final this September. Williams joins Simon Jones, Paul Jackson and Constantine Paparestis on the Poker Encore roster. Not to be outdone, PokerStars signed 2010 Olympic gold medalist cross-country skier Marcus Hellner as its latest SportStar. Hellner claims to have caught the poker bug at ski training camps when he noticed he “liked very much to steal little bit money from the guys!” (Perhaps Marcus would be a better fit over at Full Tilt? Sorry… Too soon?)

Window shoppers in New York’s trendy Tribeca district will have a lot more (or a lot less, depending on your perspective) to ponder this weekend. Starting Saturday afternoon, the Art In General gallery will feature a rotating cast of seven male and female performers playing strip poker in its storefront window. The games will go 7.5 hours a day for a full week. Zefrey Throwell, the ‘artist’ behind the “I’ll Raise You One…” installation/presentation/titillation, claims it’s a metaphor for the troubled US economy, in that players who start with the least amount of clothing will end up naked quicker than their many-layered competitors. “Wealth is unequally distributed – yet we’re all expected to play by the same rules. It’s a political and economic criticism.” As the players’ wobbly bits will be fully visible to sidewalk passersby, one imagines New York City’s finest may offer some criticism of their own.