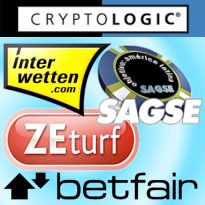 Continuing on their modest positive momentum in Q2 2011, online gaming software developer Cryptologic saw income before tax increase to $1.3m in Q3 from $0.5m in Q2. Total revenues rose to $7.2m from $7m in Q2, although branded game revenue fell to $1.4m from $2.1m. The company also reduced total expenses from $6.5m to $5.9m and improved its cash position to $15.2m from $12m. The strategic review undertaken by consultants Deloitte in March remains ongoing, as does Cryptologic’s lawsuit against an unknown brand licensor. Cryptologic launched the suit in June after disputing the licensor’s claim that the deal between the pair had somehow been breached, and the unknown company (rumored to be either Paramount Digital Entertainment or DC Comics) filed a countersuit last month.

French horse betting operator ZEturf will bolster is existing relationship with EurosportBET by offering online poker under the ZEpoker brand. The two companies have signed a memorandum of understanding that envisions a white-label online poker product ready to go early in 2012. By diversifying this way, ZEturf hopes to kick up some mud into the eyes of their nemesis, Pari Mutuel Urbain, who made the leap to online poker when France liberalized its market early in 2010.

The American Gaming Association and Reed Exhibitions have expanded on their five-year partnership with the South American Gaming Suppliers Expo (SAGSE). Under the new deal, SAGSE will serve as the official Latin American sales agent for the Global Gaming Expo (G2E), so expect a boosted Latin presence at next year’s G2E in Vegas (Oct. 1-4).

Austrian operator Interwetten has inked two sponsorship deals with European sports clubs. Interwetten has signed on with Spanish side Sevilla FC and Czech hockey team HC Sparta Prag, giving the company a presence on ad boards and video displays at each club’s venue, as well as on each club’s homepage.

After making such an impression with their deal to slap QR codes on the backsides of female beach volleyball athletes, Betfair has gone back to the QR well for another sip. This time, however, the QR codes (which, when scanned, will lead punters to Betfair’s mobile site) will be shaved into the backs of Bromley FC players’ heads for this weekend’s FA Cup match against Leyton Orient. Frankly, we preferred the female arses to the Bromley noggins, and it leaves the footie squad vulnerable to being labeled ‘Betfair’s new bums’ (but only if they lose).