Stop us if you’ve heard this one: Joe Francis files civil suit against Steve Wynn 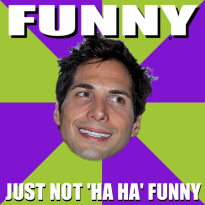 Joe “Girls Gone Wild” Francis has filed a(nother) civil lawsuit against Wynn Resorts’ chairman Steve Wynn. The lawsuit, filed Tuesday in US District Court in Los Angeles, accuses Wynn of (deep breath) Malicious Prosecution, Abuse of Process, Intentional Misrepresentation, Defamation, Intentional Infliction of Emotional Distress and Conspiracy. Naturally, Francis is seeking damages in the low kajillions. (Was it purely coincidental that Francis filed his suit on the same day that Wynn’s nemesis Sheldon Adelson was being inducted into the Gaming Hall of Fame? Has to be. Because that would be total dick move.)

In case you weren’t already painfully aware of the origins of this feud, here’s what you missed (deep breath): A few years back, Francis ran up a $2.5m marker playing the high roller at Wynn’s fine gaming establishments in Las Vegas. Francis repaid about $500k and said, hey, let’s call it even. Wynn objected to Francis’ inability to perform basic math, and sued. As the suit progressed through the courts, Francis publicly claimed that Wynn had threatened to hit him over the head with a shovel and bury his body in the Nevada desert. Wynn sued Francis for slander. Just to make things interesting, Francis filed a defamation suit against Wynn, ultimately losing in April of this year. Midway through September, Wynn’s felony theft criminal case against Francis was tossed out of court, and Francis partied like it was 1999 (which is about when we assume the dickless wonder last got it up without Viagra). Earlier this month, Francis lost the civil suit (again), meaning he still owes Wynn $2m. And here we are…

The gist of Francis’ current suit is that, despite allegedly knowing that no felony theft had occurred, Wynn claimed otherwise to the Las Vegas District Attorney’s office, which led to the criminal charges against Francis. Francis claims Wynn told the DA these tawdry tales purely to put pressure on Francis to, uh, pay Wynn his fucking money. Now that the criminal case has been tossed, Francis wants compensation for the alleged damage done to his reputation. That’s right; the guy who convinces drunk college girls to show him their vulvae on video in exchange for a T-shirt is worried that people will think he’s not a prime candidate to hold elected office.

Honestly, at this point, it’s hard to know whether to pity Francis or to admire him. He’s angry over having spent millions in legal fees to process all these different cases, so his response is to authorize his lawyers to do a little more overtime. (We assume he ran up that $2.5m marker doubling down after every loss.) The idjit just won’t let it lie. Guess you have to respect the guy’s willingness to cry ‘once more into the breach’ but, seriously, if this goes on much longer, we’ll be tempted to do a little shovel shopping ourselves.