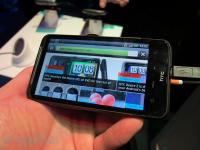 Smart device manufacturer HTC is thinking about developing their own mobile operating system so that they’re not left behind by the competition. The company that is based in the Far East is reportedly looking at purchasing one after realizing that everyone else either has their own or is tied up in a partnership.

CEO Cher Wang told the Economic Observer of China, “We have given it thought and we have discussed it internally, but we will not do it on impulse.”

It doesn’t sound like there’s anything in place yet. The fact that they’re even having thoughts about it speaks volumes for the strategies of certain technology companies in this field. Of their competitors in this sector, most are run on another platform as well as being available on Google’s Android OS. HTC may well be releasing a phone running the Windows Phone technology. This is likely to change as the deal between Nokia and Microsoft continues to mature and leave HTC with just Android. Things could worsen if Google decides to focus on Motorola for its OS and Samsung still has its own OS – Bada – for which it has had little success but can still fall back on.

HTC has also recently been subject to lawsuits from Apple and it’s no coincidence that their handsets are considered among the best you can get on the Android OS along with Samsung. For the online gaming industry, the presence of another mobile OS could be problematic for native apps. For those that have developed web-based sites, it shouldn’t affect them too much as a new OS will just mean more customers.