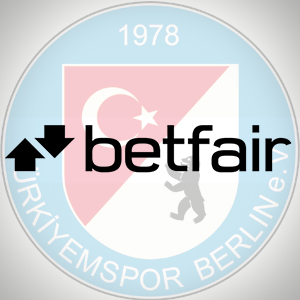 Betfair spent all weekend partying after the European Commission agreed with them and woke up this morning to find that they’d entered into a football shirt sponsorship deal. It’s not just any deal though. They chose to sponsor German fourth division side Türkiyemspor Berlin (you’re not alone in wondering who they are.)

Betfair’s regional manager of Germany and Central Europe Peter Reinhardt, commented, “Türkiyemspor has worked hard both in the field of athleticism and in working for tolerance and integration within and beyond the local community. For us they are more than a football club. We specifically chose to sign with a sports club and not a professional football club.

“Without a foundation of sports clubs like this, there would be no professional football clubs. We are very pleased to be the new sponsors of such a special sports club and for the role we will play in helping this club move forward from the troubles of last season.”

Sponsoring a side that play out of the nation’s capital city won’t do Betfair any harm either. Chairman of the club, Yalcin Sancar, said, “Our partnership with Betfair in the new season is an important and successful step for us. We are leaving behind the disappointment of last season. We must lay the foundation for a successful and sustainable future together – we must build that future together for the success of Türkiyemspor.

“Signing a sponsorship contract with an internationally successful organisation is another important step in multi-cultural bridge building for Türkiyemspor and it is a sign of our appeal.”

The club was founded in 1978 as a multi-cultural sports club geared towards the Turkish community in Germany. It currently plays in the Regionalliga Nord. The agreement runs for one year.