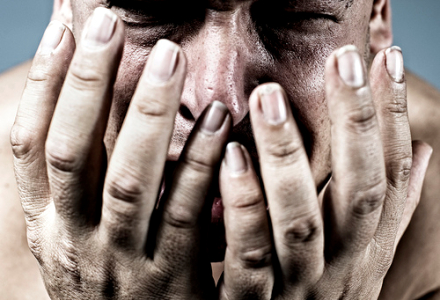 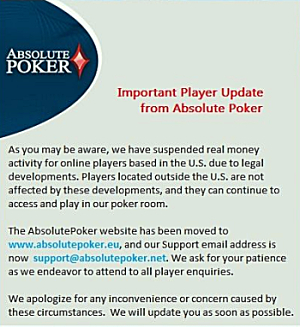 All the latest Black Friday poop that’s fit to scoop…

✖ While Cereus sites Ultimate Bet and Absolute Poker originally claimed to be sticking with the US market, some sober reflection over the weekend may have prompted a change of heart. Or has it? Early Monday reports suggested both Cereus sites had joined PokerStars and Full Tilt in blocking US players from real money action (see notice at right), but some players are now claiming AP is still open for business on their US-based computers. What is certain is that Victory Poker, currently on the US-facing Cake Network, has publicly requested that US players be blocked from playing on Victory.

✖ In a Manhattan court Monday morning, Black Friday defendant Bradley Franzen entered a plea of ‘not guilty’ to the nine counts listed on his indictment, including bank fraud and money laundering charges. The 41-year-old Franzen’s bail was set at $200k, for which his parents’ house was used as collateral. Franzen’s lawyer, Sam Schmidt, would only say that he and his client will be “reviewing the indictment.”

✖ Also on Monday, defendant John Campos appeared in a Utah court, although he did not enter a plea to his charges. The part owner of SunFirst Bank was ordered to surrender his passport and to appear in a New York court for his next appearance, for which no date has been set.

✖ Somewhat unrelated, but New Jersey Sen. Ray Lesniak is now saying his pro-poker referendum bill will now be introduced into the legislature in early May, not April 29 as earlier reported.

✖ As was widely expected, some European gaming stocks saw dramatic upward spikes as sheep, er, investors dutifully did as the mainstream business press instructed. Bwin.party (Pwin) closed up almost 30%, 888 Holdings was up over 19% and Playtech was up almost 11%. It wasn’t all public company gravy, however, as William Hill lost 2% and Betfair lost 5.5%. On the other side of the pond, Las Vegas Sands gained 3.6%, Wynn gained 1.5%, while MGM was off 1.6%. Clearly, the US market is far more ‘meh’ on the prospects of any future tie-ups between US gaming licensees and foreign online gaming firms paying off anytime soon. 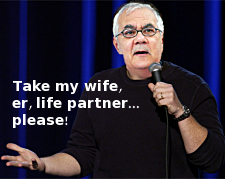 ✖ Speaking out re Black Friday for the first time, Rep. Barney Frank (D-MA) told The Hill that “protecting the public from the scourge of inside straights” was “an incredible waste of resources.” Calling the UIGEA “a bad law,” Frank urged the US Department of Justice to refocus its energies on the execs behind the 2008 global economic crisis. “Go after the people responsible for empty houses, not full houses … I’m not saying violate the law, but to give this priority in law enforcement … is a terrible idea and I think the administration is wrong on this.” Appreciate the support, Barney, but fold the poker puns, okay? It was bad enough when the Feds did it. This is serious business, not open mic night at Second City.

✖ Lobbying disclosure docs indicate that Frank took in over $51k in campaign contributions from the Poker Players Alliance in 2010, on top of the $50k Frank derived from other poker industry sources, such as players Annie Duke and Howard Lederer. Meanwhile, Nevada’s Assembly Democratic Caucus has decided to return the now-tainted money it received from PokerStars during the 2010 midterm elections (unless the Feds claim it first), and Republican State Sen. Greg Brower is pressing Sec. of State Ross Miller to probe whether PokerStars’ $272k worth of Nevada lobbying activities broke the law. Brower also plans to introduce legislation barring foreign contributions to state political campaigns, similar to existing federal legislation.

✖ ESPN has officially axed its coverage of the 2011 North American Poker Tour (presented by PokerStars.net), which was set to make its debut on the network Monday night. ESPN released a statement reading: “We are aware of the indictment only though what has been announced publicly. For the immediate future, we are making efforts to remove related advertising & programming pending further review.” And presumably, pending a good cry. (PokerStars’ contract with ESPN was reported to be worth $22m to the network.) The broadcast of the upcoming 2011 World Series of Poker will reportedly not be affected. Elsewhere, Fox Broadcasting has reportedly cancelled its two poker offerings, Million Dollar Challenge and The Big Game.

✖ Finally, in the ‘no, really?’ department, IrishDev.com contacted FullTilt’s associated Dublin-based company Pocket Kings for comment. No such comment was issued, but an employee described the atmosphere among the 700 staff at the Cherrywood Science and Technology Park office this morning as ‘sombre’ and ‘concerning’. Imagine that…