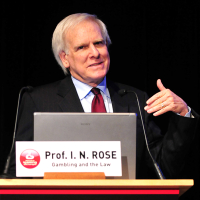 In Professor Rose’s latest post at Gambling and the Law®, he discusses the Poker Indictments and revisits the prohibition era. The following is Prof. Rose in his own words.

The timing is suspicious.

March saw Nevada regulators approving a partnership between Caesars and 888, and Wynn announcing a joint venture with PokerStars. Now comes the indictments, three-billion-dollar civil suit and seizures of domain names by the feds. Wynn immediately cancelled his plans. Players were panicked.

Which was, of course, the goal.

If the allegations are true, the operators brought this on themselves, by lying and bribing bank officials. Of course, the prosecutors have the problem of convincing a jury that there is bank fraud when the “victims” are tricked into making millions of dollars.

And will this be the end of Internet poker? Did Prohibition end drinking?

Prohibition created modern organized crime, by outlawing alcoholic beverages. When people want something and it is illegal, organizations will arise to fill the demand. How much more so when the activity, online poker, is not even clearly illegal?

Every action by the U.S. federal government makes it more difficult for it to go after the next operator. The UIGEA, rammed through by the failed politician Bill Frist (R.-TN), can be seen as an anti-consumer-protection law, because it scared all of the publicly traded gaming companies out of the U.S. market.

Then prosecutors went after payment processors, making it more difficult for players to find legitimate ways to send their money to betting sites.

Now the feds have seized .com domain names and charged operators with bank fraud. So, gaming sites are switching to .eu and .uk, and cutting off all physical contact with the U.S. Even the present American operators can’t be extradited, so what hope is there for the DoJ to bring future foreign operators here to stand trial?

The Grand Jury has been meeting for at least a year. The criminal indictment against PokerStars, Full Tilt, Absolute and their founders, was unsealed by the U.S. Attorney for New York on April 15, but bore a date-stamp of March 10. So why now?

Besides the Caesars-888 and Wynn-PokerStars agreements, the Nevada Assembly Judiciary Committee recently approved a bill to regulate online poker. And the District of Columbia actually made it legal.

The DoJ has been waging a war of intimidation against Internet gambling for years, successfully scaring players, operators, payment processors and affiliates into abandoning the American market. Lacking the two essentials to any prosecution – a statute that clearly makes the activity illegal and a defendant physically present in the U.S. – the feds have announced showy legal action against easy targets about every other year.

Online poker is not an easy target, since a federal Court of Appeal ruled the Wire Act is limited to bets on sports events. And tricking financial institutions into processing poker payments seems a technicality, especially since the banks made millions without paying a penny in fines.

But getting a bank to agree to process gambling transactions in return for a $10 million investment is an easier case, if true. I can understand approaching a small bank – so small that the officer and part-owner who allegedly arranged the deal, asked for, and received, only $20,000 for his “bonus.” But why would you do this in Utah, of all states?

There are lots of interesting nuggets in the legal papers. The DoJ claims that one-third of the billions of dollars players deposited went to the operators through the rake. That number seems high, but if true, it explains why everyone wants to operate an online poker room, with few expenses and no chance of losing to a lucky gambler.

All of the activities cited occurred after the passage of the UIGEA. This is a subtle acknowledgment that operators who left the U.S. in 2006 have nothing to fear.

Even if there was a bribe, the feds are still going to have to prove that the poker was illegal. Since the Wire Act won’t work, prosecutors used 18 U.S.C. 1955, which makes it a federal felony if five or more people do more than $2,000 in business a day in violation of state gambling laws. There is a “thank you” to the Washington State Gambling Commission, indicating that the DoJ is probably going to piggyback on that state’s 2006 law outlawing all Internet gambling.

The Washington statute was upheld by the State Supreme Court. Still, there are problems. State laws are presumed not to reach beyond their borders. And even if Internet poker is illegal in that state, it is quite a leap to seize domain names for the entire country and threaten bank accounts in places like Panama.

The only state with a law better than Washington’s is Nevada. But basing this attack on Internet poker on Nevada law would look like it was motivated by the landbased casinos. After all, who are the big winners here?

We will probably see the first attacks on the indictments from the two defendants who were arrested, the Utah banker and the Nevada payment processor who allegedly bribed him, when they fight extradition to New York. And the poker operators will undoubtedly fight to get their .com names back for the rest of the world.

The operators will never stand trial. The only U.S. extradition treaty I have found that covers illegal gambling is with Hong Kong. Calling it bank fraud won’t work, since the defendants can show their local courts that it is based on gambling. And it is fundamental to all extraditions that the activity be illegal in both countries. No nation will extradite an individual to be tried for the very activity that that nation licenses.

There may not even be a settlement. The DoJ accepted $405 million from PartyGaming and one of its founders and $100 million from Neteller and its founders. But those companies had already left the U.S. gaming markets. The DoJ will insist on a guilty plea to something, which might kill the operators’ chances of getting licensed when American laws change. And no amount of money will buy them the right to open up again without a change in the law. So what would these operators get from a settlement, other than not having to be worried about getting arrested changing planes?

It will be interesting to watch the fallout. There are a lot of famous American poker players and others who are associated with the indicted operators. They should be getting their affairs in order.

Meanwhile, like a raid by Elliot Ness on breweries and speakeasies during Prohibition, there are now wonderful opportunities for new operators to fill the vacuum. Unless, of course, Americans are actually going to stop playing poker on the Internet.

Republished with permission © Copyright 2011, I. Nelson Rose, Encino, California. All rights reserved worldwide. Gambling and the Law® is a registered trademark of Professor I. Nelson Rose, www.GamblingAndTheLaw.com.