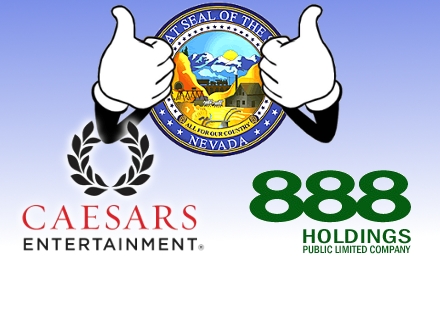 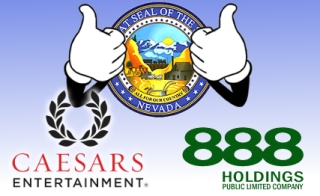 History was made Thursday as the Nevada Gaming Commission unanimously (four ‘yes’ votes and one abstention) approved the relationship between casino giant Caesars Entertainment and UK-based 888 Holdings. This is the first such approval granted to a Nevada gaming license holder seeking to do business with a foreign firm involved in online gambling. The approval upholds the decision made by the Nevada Gaming Control Board two weeks ago.

In justifying the Commission’s decision, Chairman Peter Bernhard said he was satisfied that the relationship wouldn’t violate state policies or regulations. The decision changes little in terms of enabling Nevada residents to gamble online with government blessing, but by identifying a foreign online gaming firm – especially one that has never made a PartyGaming-style immunity deal with the US Dept. of Justice – as a suitable partner for a US-based gaming licensee, Nevada’s gaming regulators might have just got America a little bit pregnant. No, thank you, ma’am.

While Nevada’s regulators were deciding 888’s fate, Nevada politicians in Carson City were discussing AB 258, the PokerStars-sponsored online poker legislation recently introduced by Assemblyman William Horne. The Assembly Judiciary Committee endured three hours of arguments on Thursday, both pro and con. Testifying on behalf of PokerStars, economist Jeremy Aguero claimed the bill’s passage would create 1,180 jobs for Nevada residents, who would stand to earn $7.7m in wages. Aguero also claimed that the state would collect taxes ranging from $2-3.4m annually, and up to $37-65m per year if Nevada’s system drew liquidity from beyond state borders.

Testifying against the bill was the Nevada Resort Association’s Peter Ernaut, who parroted the DoJ line that online poker is illegal, end of story. However, echoing past comments by the major casino companies, Ernaut said his group favored a federal rather than state solution. “We want partnerships. We’re just asking you to do it in the right order.” Van Horne retorted that the major casino companies were opposed to his bill because they feared competition. Former Assembly speaker (and current PokerStars lobbyist) Richard Perkins acknowledged that federal legislation would be preferable, but pointedly asked the Committee if they really believed legislation was imminent at the federal level. (Ooh! Ooh! Ask us! We know the answer!) In her support of the bill, poker pro Vanessa Rousso played the gender card, claiming that online poker would be a boon to women, who are often made to feel unwelcome at live poker tables. (Shaun Deeb, she’s looking at you!) After three hours of this, the Committee adjourned without taking further action.

Over in Hawaii, the House Judiciary Committee has approved the proposed SB 755 online poker draft legislation (the latest version of which can be read here). The measure was passed with nine votes in favor, three opposed and three ‘excused’. The bill previously passed the House Economic Revitalization and Business Committee by a 7-1 margin. From here, the bill needs a nod from the Finance Committee, before heading to the Senate for further consideration.

In backing the bill, several Hawaiian politicians expressed the hope that the revenue generated by the online poker network would help offset the expected drop in tourism revenue from Japanese visitors still dealing with the effects of the recent earthquake/tsunami/meltdown. Frankly, the way this bill is designed, Hawaiian legislators should expect a DoJ tsunami to strike their islands if/when the bill is passed. With its emphasis on attracting players from mainland US states and countries in Asia, not to mention its claim that the Wire Act has no legitimacy to block Hawaii from doing so, one should expect a, shall we say, vigorous Federal response.