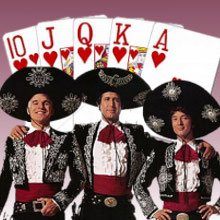 Here’s a few more tidbits on HR1174, that new federal online poker bill introduced to the House of Representatives by Rep. John Campbell (R-CA) on Thursday. With the bill making its debut on St. Patty’s, it’s fitting that one of the bill’s co-sponsors is Rep. Peter King (R-NY). King has been in the news of late for his much-discussed ‘Muslim radicalization hearings’ on Capitol Hill and the subsequent spotlight this has brought on his own enthusiastic support of the Irish Republican Army.

To be clear, King is no great gambling advocate. Last July, King was responsible for adding the ‘no sports betting’ amendment to Rep. Barney Frank’s HR2267, an amendment that remains a part of HR1174. Although King co-wrote a 2007 op-ed for the New York Post entitled Web Gambling: Tax, Don’t Ban, his primary concern is to ease the technical burdens the UIGEA placed on big banks. In 2008, King attempted to add an amendment to Frank’s anti-UIGEA HR5767 bill that would have forced the federal government to strictly define “unlawful internet gambling’ (if they actually could), so that banks would have a clearer picture of which transactions they were supposed to be blocking. Both the amendment and Frank’s bill were defeated.

In case you were wondering, while King was trying to pass that amendment in 2008, everybody’s favorite anti-gambling sourpuss and current Financial Services Committee chairman Rep. Spencer Bachus (R-AL) opined that “banks have decided that this is a financial burden. We have decided, on the other hand, that our children are worth protecting.” We at CalvinAyre.com have decided to develop an HR1174 Drinking Game in preparation for this Congressional session’s online gambling showdown. For future reference, any future variations on the ‘won’t someone think of the children’ cliché means we all have to do a shot of Hendricks Gin.

Getting back to HR1174, Poker Players Alliance chairman Al D’Amato told Politico that legal online gambling’s “time has come. You have to be in Never Never Land not to see the billions waged annually.” But with Congress preoccupied with the federal budget, D’Amato is in no hurry to rush HR1174 into the lion’s den. “There probably won’t be any movement until the second half of the year … it probably will be June before we start the push.” As befitting his PPA role, D’Amato is publicly optimistic about the bill’s chances, lauding HR1174 as something “that will protect the consumer and meet some legitimate concerns, like not exposing youngsters.” (DING! Do a shot!) D’Amato appreciates the increased number of states looking to pass their own online poker legislation, but only because he believes it will put pressure on the feds to act.

In addition to Bachus’ Financial Services dungeon, HR1174 has been referred to two other House committees: Judiciary, plus Energy & Commerce. Judiciary is chaired by Rep. Lamar Smith (R-TX), who told a 2007 House hearing that “Internet gambling sites are often fronts for money laundering, drug trafficking, and criminal organizations … Children may play without age verification [DING! Do a shot!], and betting with a credit card can lead to addiction, bankruptcy, and crime.” Alrighty, then… Energy & Commerce is chaired by Rep. Fred Upton (R-MI), who voted to ban gambling online with credit cards way back in 2003 (the bill, HR2143, was sponsored by Bachus). In 2006, Upton voted in favor of HR4411, which ultimately became the UIGEA. Seriously, if HR1174 can get past these Three Anti-Gambling Amigos, then it’s not an online poker bill, it’s Batman.

Regardless, HR1174’s proud papa Campbell can’t wait for the bill to get approved so he can explore, as he said in a statement, “the possibility of attracting foreign players to US sites.” Wow… Seeking to reverse a decade of US law enforcement policy AND the US Trade Representative’s blatant flouting of World Trade Organization rulings in one fell swoop? The kid’s got balls… Wait… We said ‘kid’. DING! Do a shot!