Home / Sports / Jockey’s title going down to the wire 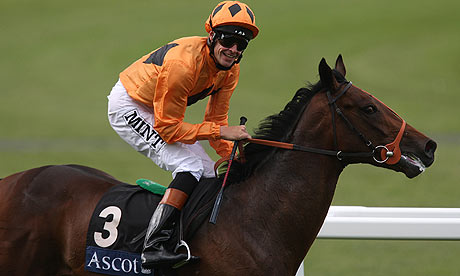 When it comes to endurance in world sport there’s few who would deny the fact that cycling’s Tour de France is the ultimate test. Covering more than 2,200 miles, lasting three weeks, and including perilous climbs along the way, it even puts a seven day stint of gamblin’ drinkin’ and carryin’ on in a dim light. It’s what elite sport is about though – pushing your body to its limits and living to tell the tale.

Horse racing isn’t a sport usually associated with this side of the fence. For a start you have another beast helping you along the way, and all you have to do is sit there. If I don’t by now have a grouping of people who are a cross between Liliputtians and Oompa-Loompas attacking me then I’m the lucky one. It’s here where we pick up the story.

This year’s jockey’s title has been the most hotly contested for years, and there’s life in the old dog yet. Richard Hughes and Paul Hanagan have been battling it out at the top for the past few months and the fight looks as if it will go to the wire. Hanagan currently leads by eight winners and, after Hughes was suspended for 14 days, it was thought the Northerner would wrap up the title.

Hughes though is continuing to fight and today takes a calculated gamble in pursuit of the title. The Irishman is saddling 14 horses at two different venues in order to try and claw back the deficit as the season nears an end.

With 11 days left of the mammoth season, if Hughes wins we know the Irish like a drink but this could bring the house down!