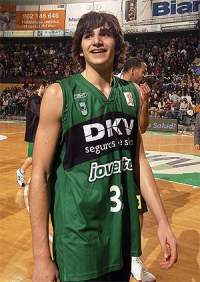 Victor Chandler’s Spanish online gambling operator Mister Apuestas has locked up yet another sports sponsorship by signing an agreement with professional basketball club DKV Joventut. North Americans know that team only as the team who Ricky Rubio, the Spanish sensation who snubbed the NBA, plays for.

The deal is surrounded by hype and gala with a presentation ceremony to be held Thursday at the Palacio Municipal de Badalona to officially announce Mister Apuestas as the team’s sponsor. It’s the third sports sponsorship signed by Mister Apuestas with the most recent being the sponsorship agreement with La Liga football club Levante UD.

DKV Joventut is a popular club that plays in the top division of the Spanish ABC league and Mister Apuestas joins Li Ning, San Miguel and Mercedes Benz as the club’s official sponsors.

Before entering the Spanish market, Victor Chandler made it clear that he was there to compete and that he felt his marketing would be distinctive. After appointing Madrid-based media agency Elogia to handle all marketing in Spain it appears he’s made good on that promise.

Why is Victor Chandler ashamed of his real name?
Steven Stradbrooke
24 April 2010
.