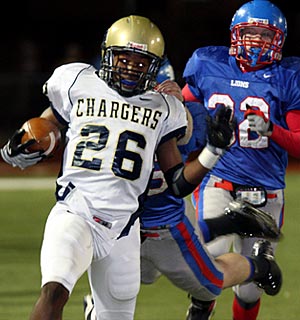 This might be the all time earliest call ever made, but I feel like I might have enough evidence to make it. Barry Sanders Jr. the son of arguably the greatest running back of all time and Hall of Famer, Barry Sanders, is now looking for a university to attend. If you’re wondering if Jr. is a chip off the old block, that’s a stupid question, of course he is.

In his last HS game this kid scored five touchdowns, three coming in a four-carry span and he ran for 313 yards on just 13 carries. Those numbers are simply bananas even for HS. So yeah, he’s got his father’s mojo. Right now, Yahoo’s Cam Smith reports that Sanders is considering his dad’s alma mater, Oklahoma State, but Alabama, UCLA and Florida State are also on his shortlist.

I have a feeling that it won’t be long before Sportsbooks will be throwing Barry Sanders jr. in the odds mix for Heisman candidates. If he goes to Alabama, Heisman, if he goes to Florida, Heisman, If he goes to Oklahoma State, hmm, Heisman! UCLA? tough one, let me think about it…Heisman! Why so much hype on this kid? Number one, most football fans pop wood everytime you mention the name Barry Sanders, and most football fans felt he left the game just a bit early for our liking, well, now he’s given us a son. Now I don’t want to be that cat that hypes a HS kid way before he’s done anything on a big stage ala Lebron James, but this kid from what I’ve seen and heard, is the absolute truth. And his father is Barry Sanders, come on! Check this kid out and you tell me, like father like son?