Home / Sports / Would you wager on a jousting match? 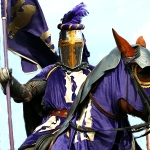 Tipped by some to become the next big ‘extreme’ sport, jousting is enjoying something of a resurgence not seen since, well, King Arthur’s day. For the record, we’re not talking about some silly Medieval Times choreographed romance-novel-cover bullshit. We’re talking about a legitimate tilt between two burly guys, each wearing 150 lbs. of armor, charging at each other on horses from 180 feet away, aiming 11-foot lances made of solid Douglas fir at each other’s heart. Kinda puts MMA’s ‘flying knee’ in perspective, don’t it?

Take the case of Shane Adams, a Canadian who first competed in an international jousting tournament in Colorado in 1997. To many an onlooker’s surprise, Adams took home the trophy. To no one’s surprise, he also took home a broken hand, a broken wrist and four broken ribs. As far as the risks are concerned, Adams is matter of fact. “You’re going to get hurt. It’s just a matter of when and how bad.” As far as his success is concerned, Adams gives credit to his Canadian heritage, and the invaluable training that hockey provides if you want to hit people with a stick as a career.

The sport is beginning to catch on with audiences at Renaissance Festivals, attracting crowds as large as 2,000. This year, the same competition that Adams first won in 1997 offered a $50K purse this year – hardly PGA numbers, but it’s growing. Equestrian college officials are asking some of Adams’ contemporaries to train instructors. If interest continues to grow, will some enterprising sportsbook start offering lines on the matchups? (Nod to would-be bettors — after a careful study of Monty Python & The Holy Grail, we have it on good authority that the Black Knight always triumphs.)