Home / Sports / Young, BlackHawk And Don’t Give A Puck 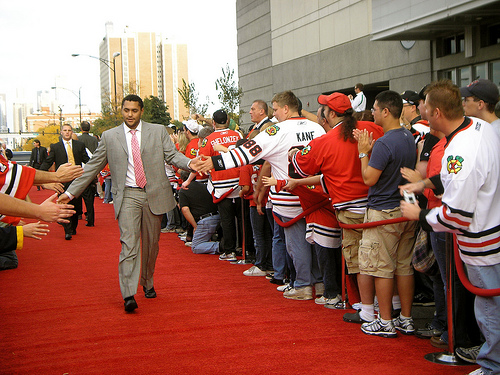 If you were wondering if the Chicago Blackhawks were for real, their convincing sweep over the San Jose Sharks should put all debate to rest and silence the many questions people may have had about this young team from Chicago. The Blackhawks basically dummied the San Jose Sharks for four straight games, outplaying the Sharks in every facet of the game.

Everyone questioned whether Niemi, the Blackhawks goaltender would be good enough to take them to the next level. It’s save to say Niemi has put those questions and concerns to rest with his dominating performance against the Sharks. There times during the series when Niemi wasn’t only keeping the Blackhawks in the game, but he was the best player on the ice for both teams. Which, isn’t as difficult as it sounds, seeing how Nabokov was terrible in net for the Sharks.

From a betting standpoint, the Chicago Blackhawks have to look like a good pick to win the Stanley cup. They have perhaps the best defensive pairing out of any team in Keith and Seabrook. Niemi is playing as hot as any goalie in the playoffs and the big names like Kane, Sharp and Dustin Byfuglien. Byfuglien has been playing like a runaway train, bulldozing anyone in his way and scoring ridiculously big goals when the Blackhawks need it the most. This is a scary team heading into the finals.

The scariest part about the Blackhawks, is they are just a bunch of young kids, rocking mullets and scraggly peach fuzzed facial hair, scoring goals, kicking ass and having a good time. They’re getting excellent leadership from their young captain Jonathan Toews who is a proven winner and Canadian hero for his performance in the Vancouver 2010 Olympics for Team Canada. He was instrumental in putting away the Vancouver Canucks and his stellar play continued throughout the conference final. When it came time to collect the Western Conference trophy, Toews made another veteran move, he wouldn’t touch it. Read more.

Chicago awaits the winner between Montreal and Philadelphia and they have to like their chances against either team. This young Blackhawks team is trying to do the unthinkable and bring Lord Stanley’s cup back to the windy city for the first time since 1961. It’s a huge turnaround for one of the league’s orginal six teams, it seems they may just be the only one to advance, Montreal will have their hands full down 3-1 to Philadelphia…Although, maybe that’s just how the Habs like it.