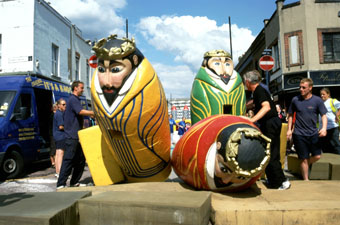 England take on Mexico tonight as the witching hour of World Cup selection approaches. Fabio Capello will be hitching his trousers up around his belly button and casting a Simon Cowell-like eye over his auditioning players but with this particular dress rehearsal taking place on a pudding of a pitch, the entertainment might be more like It’s A Knockout than X-Factor.

Sir Alex Ferguson blamed the pitch for Michael Owen’s hamstring injury in the League Cup final in March and on Saturday Blackpool’s Gary Fletcher-Taylor left the ground on crutches after twisting his ankle, despite changing his boots three times to combat the Wembley minefield.

“I am another victim of the famous Wembley pitch,” said Fletcher-Taylor. “I went over twice on my ankle and the second time was enough to put me out. The England players have got to be careful – there is a big World Cup coming up for them all. One slip and it could all be over for them.”

Little wonder then that Capello looks unlikely to risk John Terry, Ashley Cole and Frank Lampard for tonight’s match. The state of the pitch has even been criticised by England captain Rio Ferdinand and such is the furore surrounding the £798m venue Bodog is offering odds on another player falling victim of the deadly surface. You can get 6/1 about a player suffering a pitch-related injury and 11/10 that either manager will say the word “turf” in their post-match interview.

A far as the match is concerned, with a week to go before Don Fabio chooses his final 23-man squad, those on the periphery of the team will be desperate to make a good impression on their Italian boss in the last home friendly before the chosen ones jet off for South Africa but they might find it hard going in the high temperatures in London.

For Mexico the heat will make them feel at home. Javier Aguirre’s side boasts five consecutive clean sheets, a Premier League front pairing of Carlos Vela (Arsenal) and Guillermo Franco (West Ham) and with England set to play unfamiliar players and possibly even experimental formations, a low scoring game can be expected. Under 1.5 goals is a great bet at 3.25, even if it does mean you will be watching the game willing both sides not to score.

The visitors are 7/1 to win the match but 3/1 about the draw catches the eye. If you think England will win, though, then Peter Crouch to score first at 5/1 isn’t the worst bet in the world, seeing as he has scored 20 times in 37 appearances for the Three Lions.

UFC 250 Odds: Roundup of the Rest of the Card
Dan Taylor
9 hours Ago

Betfair walks away from Japanese racing
Daniel Gardner
10 hours Ago