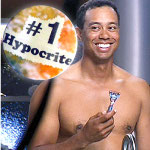 Mark Steinberg, Tiger Woods’ agent at ICM, has announced that Tiger will not be accepting Bodog’s 5-year/$100M sponsorship offer, which featured the first-ever ‘no moral judgment’ clause. Steinberg claimed the Bodog offer “does not represent what Tiger Woods wants to stand for.”

So did you notice the caveat in that statement? ‘Wants’ to stand for. Not what he actually stands for, i.e. gambling, fornicating and supplementing, but what he ‘wants’ to stand for. Hell, I ‘want’ to give half my salary to charity, and I ‘want’ to be willing to devote the entirety of my lousy two weeks vacation time to saving the fucking whales, I just don’t want to have to actually do those things, you know?

Seems the Bodog folks were wrong to offer Tiger all that money, because it’s now abundantly clear that unlike Bodog Brand founder Calvin Ayre, Tiger lacks the golf balls required to stand up in public and admit who he really is. Well, so be it. We’ll just let Tiger go back to filming those creepy ‘feelgood’ commercials that show him staring blankly into the camera, pondering life’s lessons, while the rest of us wonder if the reason that commercial only showed Tiger from the chest up was because some skank was blowing him at the time. Read more.