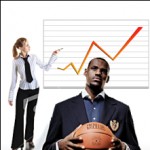 NBA superstar Lebron James has publicly stated his desire to join friend Warren Buffett in the billionaire’s club, but for the moment, he’s boosting the net worth of a whole lot of other people. Since the Boston Celtics began their improbable three-win comeback to eliminate the Cleveland Cavaliers from the playoffs, shares of Madison Square Garden Inc. (owners of the New York Knicks) have risen a stunning 12% on speculation that free agent Lebron will soon be Gotham-bound. Be interesting to note if there was a similar spike in stocks of Cleveland-based headache medication manufacturers. Read more.