Home / Poker / Tran the man is King Cuong of poker 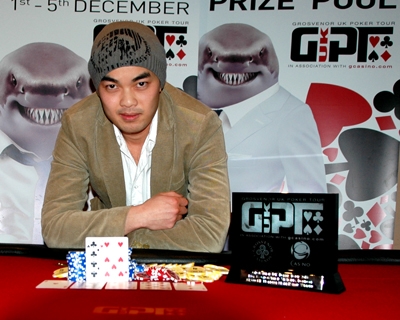 A man called Tran won the 3rd leg of the GUKPT in London on Sunday night, after beating a field of 318 players to clinch the first prize of £127,800 and unofficial title of King Cuong.

Cuong Tran got the better of Neil Channing in the final heads-up ding dong in the £1,500 NL Hold’em tournament at the Grosvenor Victoria Casino after Channing lost two successive hands with pocket pairs. Former oddsmaker Channing had knocked out Leon Bui to take a 2:1 chip lead over Tran, but the outcome was decided in two dramatic hands when Tran first doubled up to take the chip lead when making a straight on a turn that had given Channing trip eights. And the very next hand, which had Channing again on a pair – this time nines – saw another all-in, against Tran’s T-7.

The former Irish Open champion was a strong favourite to restore his chip lead only to meet his maker in the form of a ten on the turn. What you might call an unfortunate Tran-sformation, and one which left the former beauty salon owner sitting pretty with the title.

But if anyone thinks this win was a fluke, it’s worth bearing in mind that Tran placed fifth in this same event last year. “Leon should have won,” said a modest Tran of his fellow Vietnamese-born opponent Bui, who bizarrely is also a former beautician, “but I got lucky on the day. Sometimes the cards fall the right way, but hey, that’s poker.”

Unsurprisingly Tran now has more tournaments on the GUKPT in his sights. Although you can qualify via online satellites he can certainly afford the buy-ins now and plans to target the £2,500 Grand Final in November. The 30-year-old also automatically qualifies for December’s £150,000 Champion of Champions tournament.

Property developer Rumit Somaiya, who finished in 4th place went into the final as the chip leader, but was eliminated after losing a massive pot to Channing when holding a straight draw against pocket aces. Canadian student Steven Ducharme finished 5th, while Salman Behbhani from San Diego came 6th.

Former greyhound trainer Mick McCool was 7th and Darren Annis, the only previous GUKPT winner on the final table exited in 8th place. Broadcaster and Guardian journalist Victoria Coren, who four years ago won the EPT London main event went into this final with the lowest chip stack and finished in 9th place. Laurence Houghton, participating in his third GUKPT main event final table completed the line up, and came 10th.