Home / Sports / How Strong Are the Dutch Heading Into the World Cup? 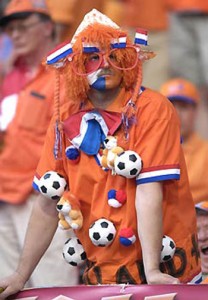 Always fancied by many but still with only the 1988 European Championship trophy in their cabinet, Holland’s world cup betting odds have been set at 14/1 ahead of this summer’s tournament.

Along with Spain, Holland were the only other nation to come through qualification with a 100% record. In the smallest European qualifying group, the Oranje twice defeated Norway, Scotland, Macedonia and Iceland to win Group 9. They conceded just 2 goals in the process. Only 23 players were used in these 8 games, which included 3 goalkeepers. Manchester United stopped Edwin van der Sar was urged out of retirement to feature in 2 games (against Iceland and Norway) due to injuries to both Maarten Stekelenburg and Henk Timmer. Joris Mathijsen was the only player to play every minute for Holland during qualification. He will be hoping to remain at centre back during the World Cup proper. Klaas-Jan Huntelaar and Dirk Kuyt lead the way with 3 goals each. Half of Holland’s qualification victories were by the odd goal.

Head coach Bert van Marwijk took his impressive record in Holland onto the national stage having lost only 1 of his 11 games. This includes draws in friendly games with Russia and England, losing to Australia in his second game in charge.

Holland are currently 8/11 favorites to win Group E, having been drawn alongside Cameroon, Denmark and Japan. Cameroon have been disappointing in the World Cup since bursting onto the scene in 1990 by reaching the quarter finals. That was followed up with 3 round 1 exits before failing to qualify for the 2006 world cup. They were eliminated at the quarter finals of this year’s African Cup of Nations despite being amongst the pre-tournament favorites. Denmark are a hard working team that will make for an interesting match against the flair Holland provide. Japan coach Takeshi Okada has expressed confidence in his side reaching the last four.
Despite reaching two finals in succession in the 70’s, the Dutch team don’t have a great record in the World Cup. This will be only their ninth finals, and last time they were eliminated by Portugal in the second round.

Paddy Power is Ireland’s biggest and most successful bookmaker. Not too mention having some disturbing adverts. Of course, we like disturbing. Maybe that’s why we get along.

Has home advantage gone? How the Bundesliga should guide your EPL bets
Paul Seaton
8 hours Ago