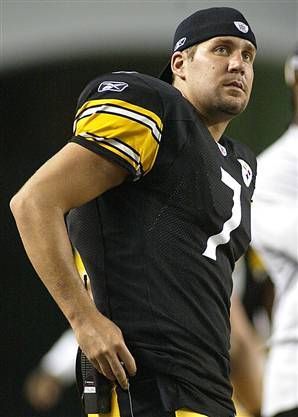 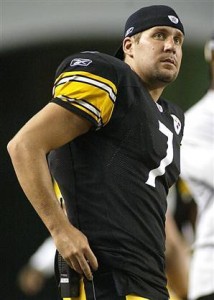 So here we go again. Can’t we go a few months without a superstar athlete involved in scandal? The thing I always wonder is why is it always the big name athletes that get in trouble, don’t the semi pro and amateur athletes get any poon poon? Sure they do, but they don’t have as much cake.

So Ben admits that he had sexual contact, but no sex. I guess translated that means a nob job. Apparently, afterwards, Ben claims the accuser fell and hit her head. That must have been some blast, Ben should know better than to rifle blasts up the middle.

But enough about Ben and the scandal, because there’s been speculation that this time, this accusation could cost the two time Superbowl Champion his gig with the Steelers. The well respected Rooney family, owner of the Steelers don’t like funny stuff off the field that could lead to distractions on the field. So now odds are up that Ben might be traded. Read more.

Personally, I think if teams traded away a player for getting a blow job in the offseason all professional team’s rosters would change from top down on a yearly basis. Let’s say that he did more than what he’s saying, let’s say that he’s found guilty of sexual assault. The way it’s turning out, I doubt he’d do jail time, he’d probably have to pay her off, but that could be cause for dismissal from the team and a possible suspension from the league. Pretty sure, if you can get suspended for killing dogs, you can get suspended for raping women.

Is this going to change the way people bet on the Steelers this year? Big Ben had to deal with this same issue last year and we all saw the brutal results of his past season. You can never tell how these things are going to affect an athlete. It’s always one thing to face pressure on the field, where they’re trained and where they’re comfortable, after all that’s their arena. But personal attacks, legal problems and public outrage, an athlete could wither under the pressure and the constant scrutiny. There are those athletes though, that respond and actually play better, like Kobe Bryant. Rape charge, no problem, fly to court, fly back, drop 81 points, fly back to court no worries. Football might be little different, certainly if this puppy goes to trial it will take away from his preparation and the last thing any NFL team needs is a distracted QB. Don’t know about you guys, but all bets are off for me on the Steelers this year.