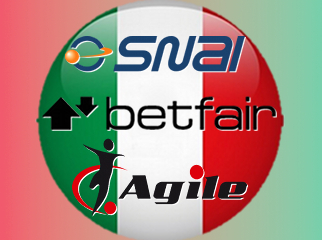 Punters in Italy are one step closer to legal access to online exchange betting following finance minister Vittorio Grilli giving the concept his blessing. The news will be welcomed by Betfair, which could use a new market after exiting so many others last year. Microgaming also stands to benefit via its deal with Betdaq, the exchange recently acquired by UK bookies Ladbrokes. And just think: it’s only been 15 months since the ministry first issued its betting exchange decree, and nine months since the European Commission signed off on the plan. Who says bureaucracy moves slowly?

Then again, Italy’s plans to open a tender for 2k new betting shops was scuppered last week after a judge ruled that online betting outfit Agile SpA had been unfairly excluded from the proceedings. A week prior to the scheduled commencement of the tender, Italian gaming regulator AAMS had published a list of the companies bidding for the shop rights, but once Agile SpA realized its name was nowhere to be found, the company filed a complaint with the TAR Lazio administrative court. The tender has been put off until April 10, but government reps are reportedly trying to work out a deal with Agile to allow the process to restart sooner.

On Wednesday, AAMS revealed the dozen lucky recipients of new video lottery terminal (VLT)/amusement with prizes (AWP) licenses. The lucrative licenses, which are valid for nine years, went to familiar names like Lottomatica, Intralot, Sisal, SNAI, Codere, Cogetech, Cirsa and Merkur. Not making the cut was the nation’s largest VLT/AWP operator, B Plus, which was instead granted a six-month extension on its existing license. B Plus, which is run by Italian businessman Francesco Corallo, operates 90k machines across Italy, but it’s still dealing with the fallout of having the Prefect of Rome label it as being “at risk of infiltration by the mafia.” Should AAMS and/or the European Court of Justice ultimately determine that Don Corleone is indeed taking B Plus’ cannoli, the company’s VLT rights could be put up for bids by the other licensees.

Finally, SNAI CEO Stefano Bortoli has announced he will leave the company after a mere 18 months on the job. Bortoli, who previously served as CFO of Lottomatica, has agreed to stay on until the company’s next shareholders meeting on April 26. The press release announcing Bortoli’s exit stated the split was amicable and that he was leaving to assess “new personal perspectives.” Current SNAI chairman Giorgio Sandi will assume the CEO mantle upon Bortoli’s departure. Three other SNAI board members also announced their intention to leave, triggering a provision in SNAI’s by-laws that require the appointment of a whole new slate of directors at the next shareholder meeting.